“…Necro sickfuck old school death metal inspired by the fastest riffs of Nihilist, Sadistic Intent, Repugnant, Sepultura and Slayer…”. And you think I will let a band with such description walk by and not ask a single question? Guess again…(Ricardo)

Well, let’s start with the unavoidable question…how things started for Incarceration? At first it was a one man project from Brazil, but now there are three members and the band headquarters is in Hamburg, Germany. Why did you move from Brazil to Germany? Could you tell us more about that? How did you get in contact with Björn and Michael?
Hi Ricardo, first of all thanks for the invitation for this interview. Very cool your atitude to print a zine in 2014 and also let it available for free over internet. Total support ! I moved to Germany ‘because of love’. My girl is German. She moved to Brazil to live with me and after 2 years she ‘imported’ me to her country. Now we live here. After we moved i began to ask around for the most sickfuck bassist and drummer on the area and after sometime i’ve met Björn and Micha.

Let’s talk a bit about you…When you got in contact with extreme metal, you stated you were into the fast Brutal Death Metal scene of Brazil like Krisiun, Abhorrence, Rebaelliun en Ophiolatry. In 2007 you began to discover the Old School Death Metal scene. Which bands grabbed you by the throat? And why were you intrigued by the Old School style? Your first band Mortificy was at the age of 14, and not surprisingly as you were a fan of the genre, Brutal Death Metal. You even played tons of gigs and even did tours. You even have played for 2000 people. Can you tell us more about those days?
Fuck Ricardo, you know more about me than myself haha! About the bands that grabbed me by the throat on that time i can say Repugnant, Verminous, Sadistic Intent, Nihilist, Entombed, Dismember, etc. I got in touch with these stuffs and needed to play that kind of music. I even thought about change the identitify of MORTIFICY. But to preserve the Brutal Death Metal concept, a few years later i started INCARCERATION. 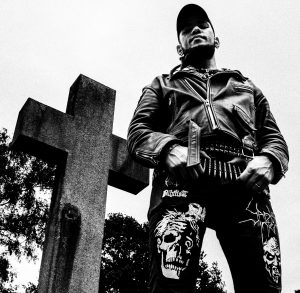 After the “Decrepit Aberration” split with Escarnium, you have written 2 songs and put the one and only song of the split, “Sacrifice”, on the “Sacrifice” EP which was released on tape (300 copies) by German label F.D.A. Rekotz. Not long after this release Dawnbreed Records from The Netherlands has released it as a 7” (limited to 500 copies). And if that isn’t all, there is a CD version as well, released by Misanthropic Records & Dawnbreed Records, also limited to 500 copies. Where did you record it, who produced it, and are you still satisfied with the songs, production and artwork? Can you tell us more about the recording process? How are the reactions on this one so far? The statement “…Necro sickfuck old school death metal inspired by the fastest riffs of Nihilist, Sadistic Intent, Repugnant, Sepultura and Slayer…” creates expectations, is this your idea or F.D.A. Rekotz? Also, was it your idea to release it on cassette only at first?
The writing process was a bit tiring, i needed time to write all the riffs. But the recording process was very simple. Nestor Carrera (from Escarnium) recorded the drums in Brazil and i recorded the others instruments/vocals on my PC. After all i sent everything to Jera Cravo and he did the magic with mix/master. After have the master ready we put Forsaken and Forgotten on Youtube and days later we had invitation from the labels you mentioned. Since the beginning the plan was to release in different countries/formats. About the Death Metal statement, it was my idea. Was the best and more honest way i’ve found to introduce ourselves. \m/

Autumn 2013, you went on a European tour with Escarnium. Tell us more about it…everything went well…very well? Or you also had evenings with only 20 people in front of the stage? Or car trouble? Any cool or fun road stories to tell our readers?
It was the most intense experience for us till now. First time of Micha and Björn on the road, our first time touring together, it was fun. On the day after the first gig in Wolfsburg we were leaving the place and the promoter (Steffen from Cryptic Brood) gave us a box full of beers (36 beers i think), so you can imagine ‘the atmosphere’. We had so many crazy moments there in The Netherlands, Belgium and other countries. Every day, every moment was special. Was awesome to be on the road with the Escarnium guys. Some gigs in front of 20 people as you said but anyway we played as we were in front of 200. We love to play together. Even rehearsing we bang our heads like crazy. Having 20 guests is already total insanity! We played in Hamburg (city where we are based) in the middle of the tour and was exactly on the day of my birthday. My girl and even my fathers-in-law (my German family) were there among 150 insane bangers. We did an awesome gig, our friends were proud of us and after that i was celebrating my birthday with them. It makes more sense if you have in mind that i moved to Germany in the end of 2011, so was pretty cool to celebrate my birthday in this way in less than 2 years later. Kind of moment to remember and feel good you know ? 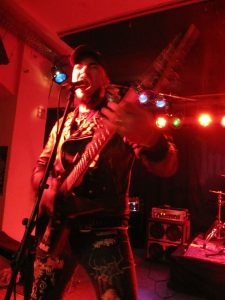 Can you tell us more about the new material? Is it in the same vein as the “Sacrifice” EP? What are your expectations for the (near) future for Incarceration? You will tour with Chilean obscure Death Metallers of Unaussprechlichen Kulten and also with the Mexicans of Zombiefication in September 2014. Can you tell us more about it? Also you have confirmed to be on stage during the Party San Open Air 2014.
At the moment we are writing the songs of the Debut Album. It’s different than writing an EP of 10 mins for lots of different reasons. To have a whole full lenght without breaks and only ‘tupa tupa tupa’ unfortunately is boring. So we are trying to be as killer as possible without sounds boring. If Reign in Blood is one of you favorite albuns i think you will like what we are preparing. It will be made exactly for maniacs into Hanneman fastest riffs. And yes, we have cool gigs this year. This month we’ll play with Necrowretch, Morbus Chron, our mates of Graveyard Ghoul. Later we play with Nunslaughter, Demonical, Centurian. We are also very excited to play at Party San together with masters like Obituary, Malevolent Creation, Grave, Napalm Death, Suffocation etc. And then tour in September as you said. The plan is to keep playing killer death metal, bringing our insanity and meeting maniacs all around and improving the friendship between the bandmembers. \m/

Well, that’s all from The Netherlands. Anything to add?
Congrats for VM Underground Ricardo, the scene needs more atitude and you’re a very good example. Im proud of you, cool interview! Thanks for the invitation and thanks for everybody who follow INCARCERATION. It’s much more fun and makes much more sense with your support. Hope to meet all you necromaniacs somewhere. Stay tuned on www.facebook.com/incarceration , come visit us at some gig, lets share a beer and celebrate the underground. Enjoy your life, bang your head and listen metal ! \m/