Nightbearer – Ghosts Of A Darkness To Come 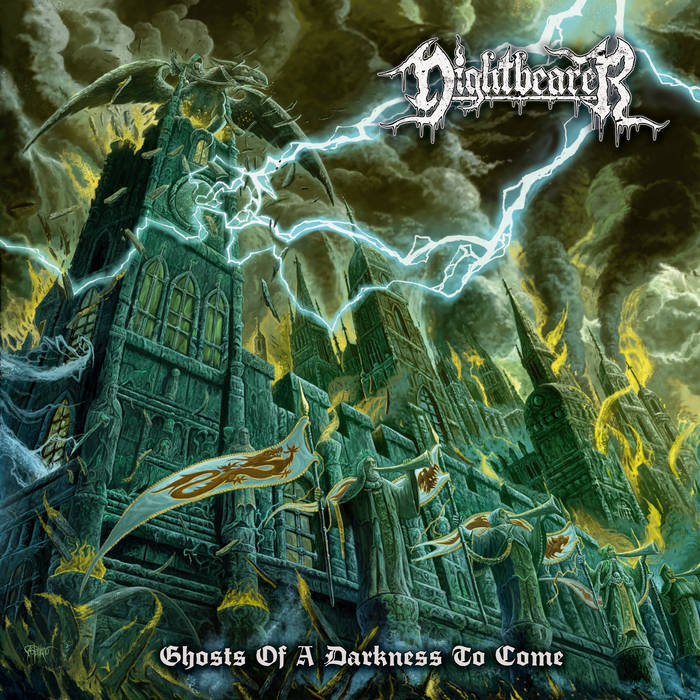 Not too long ago a non-metal-listening friend of mine commented on the covers of metal LPs, according to him they were so much nicer and made with more attention than in any other musical genre. I think this new album by the German Death Metal band Nightbearer is graced by a typical example of a great cover. For me that was also the eye-catcher of this album: it was the beautiful artwork by Juanjo Castellano that caught my eye. He never fails to impress with breath taking covers, but what is Nightbearer doing musically on this second full-length?

Here at VM-Underground this album’s predecessor, ‘Tales Of Sorcery And Death’ (2019, Testimony Records) was described a musical son of Dismember and Naglfar. This is not a too far-fetched summary of what Nightbearer brings to table. A slight buzz-sawing Swedish guitar sound with lots of melodic leads, rattling double-kick drums and a rather dry growl is still what you’ll get served on ‘Ghosts Of A Darkness To Come’. This is the type of music that got released a lot, mainly through record labels like F.D.A. Records, but rarely get passed the level of mediocrity. I recently reviewed Paganizer’s latest album, which was hardly more than an in-between-snack, that is perfect example of a way too standard Death Metal record.

But then you have bands like Nightbearer who are way more interesting, the music has all the same ingredients but feels like a refreshing take on a Swedish Death Metal, a niche-genre that is rather limited to begin with. Nightbearer brings elements of bands like Edge Of Sanity and Fleshcrawl to the mix of Dismember’s mid-period and more recent Naglfar or Necrophobic melodicism. Lots of tempo changes, melodic leads to secure a healthy dose of variety and dynamics. But there is a lot of great chopping Death Metal riffery to feast upon too, listen to the fiercely mincing start of ‘Forever In Darkness’, which is an outright neck breaker. With the band putting more emphasis on melody and increasing the tension in the song writing, they have taken a huge step forward compared to ‘Tales Of Sorcery And Death’, which was way more standard and, with that, less convincing. Maybe the sound, production-wise, might be a little too clean for some, but it makes the music reveal all its details and in this case enhances the listening experience.

With ‘Ghosts Of A Darkness To Come’ they have outdone themselves and and proved that a genre thought to be dead is in fact very much alive. In fact, Nightbearer has just revived it and proves that with creativity and colouring outside the lines you can deliver a very convincing album that still sounds like a nice game of Swedish Death Metal (from Germany). (FelixS)