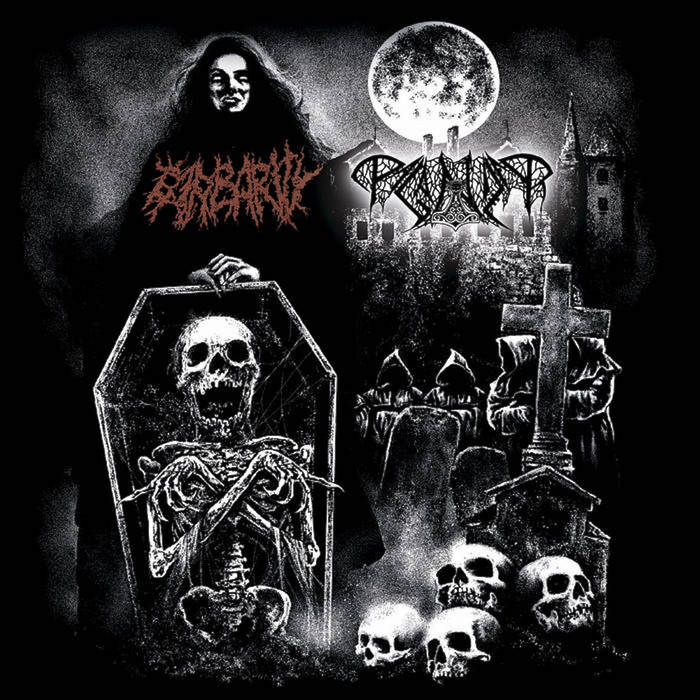 On this split 7″ EP we find a collaboration between Russia’s Barbarity and the Swedish workaholics of Paganizer. Both bands each contribute a song on this EP provided with beautiful cover artwork.

Barbarity opens this split EP and brings a kind of Death Metal that fits well with their band name. I must say that, despite their already quite extensive discography, I had never heard of these Russians before, but this is certainly not a bad first introduction. Their rather raw but technical Death Metal has an American feel to it, with the bass guitar in particular having a clear and prominent role. The band doesn’t shy away from some melody either, an occasional guitar lead giving the whole thing a bit more of its own. The raw vocals finish it off, making for a fine contribution to this EP.

On the other side, we find Paganizer. Where the band often can’t hold the attention on their full-length albums, they often succeed much better on their (split) EP’s and that is where I like them best. Of course, Paganizer will never come up with a surprise and their contribution to this EP is no exception. Primitively pounding and slightly Swedish Death Metal that in this case also incorporates some nice leads. Though not at all shocking or top-notch Death Metal, it is most definitely one of the nicer tracks that I heard from Paganizer the last few years.