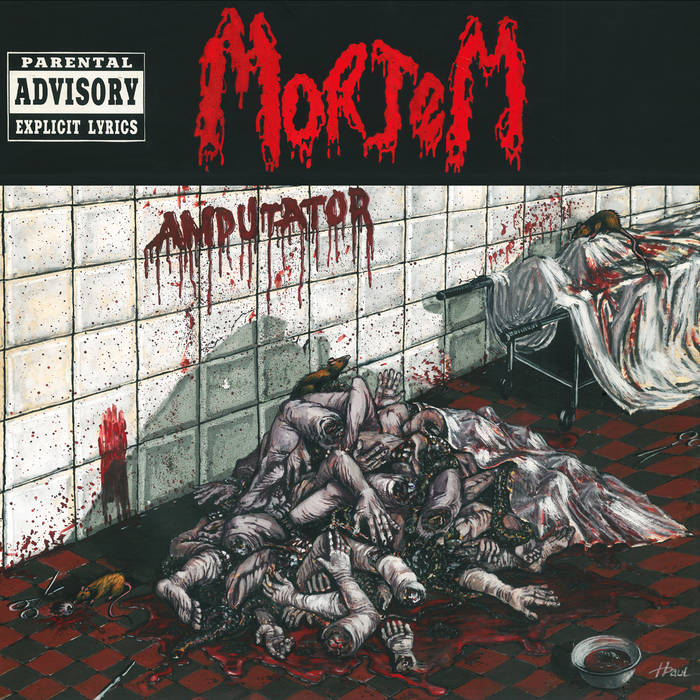 Reviewing this treasure is a bit of a little party for myself. In the early years of my ‘metal career’, I was lucky enough to buy a nice collection of vinyl from someone who used to run a label and distro. Among them were many gems that I cherish to this day. Also among them, I found some obscure LP’s, two of which I found particularly interesting. Not only because of their musical content, but also because they were Russian Death Metal records. One was Death Vomit and the other was Mortem. Both were quite obscure and much sought-after records in those (pre-Discogs) days. The sparse tape/CDR trade contacts I had in the Russian metal scene at the time all talked about Mortem, Death Vomit and Master (the Russian, not the American).

Now, fast forward 20 or so years, Coyote Records is re-releasing that Mortem debut, ‘Amputator’. Not entirely coincidentally, Coyote Records is also a Russian label, but that doesn’t take anything away from the fact that it’s a good move by them. Because especially with today’s knowledge, I think this particular Mortem album is definitely one of the better Russian Death Metal albums from that early scene. To do justice to this humble classic of Russian metal, the album has been remastered, but the original recordings have also been added to this reissue. And that is not a bad idea, as often fans of remasters and of the original recordings are clearly divided into two camps. I find myself in the ‘original first’-camp in almost all cases, but the remastering of this album has been done with a lot of skill and love which has preserved the nature of the music and, in a certain sense, its soul as well. It goes without saying that the original recordings are a lot rawer and certainly by today’s standards sound a bit flatfooted. However, this is the way I got to know it and they are still assured of my (slight) preference. The remasters, however, make it sound much more solid and gives extra punch to the massive riffs and deep growling vocals. The band could already be very accurately described as the Russian equivalent of Cannibal Corpse, but with the remasters so fresh in my ears, that comparison only goes up even more. The ultra-deep vocals are not inferior to Chris Barnes and the slightly technical and deliciously chopping riffs are also a good match for their Big American Brother.

Not only does this release put me in a nostalgic mood, which I can usually linger in and then put on one LP after another to reminisce, but this release also brings a valuable album out of obscurity. Coyote Records has released not only the CD, but also a version on cassette tape and a whole bunch of different T-shirt designs. As I flip my record over once more, I enjoy this full-fledged and more than deserved tribute to Mortem.