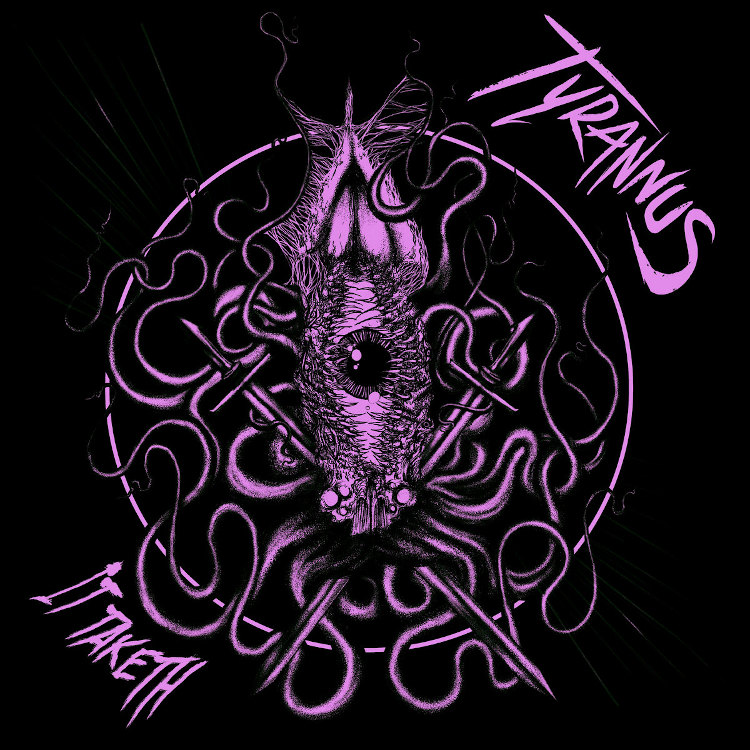 Scotland seems to be becoming a bit of a breeding ground for some metal at the minute, From Death Metal merchants Coffin Mulch to Speed Metal trend setter Hellripper, to name a few, we’re getting a good bit of worthwhile material to sink our teeth into. Since starting up in 2018 Scottish Blackened Thrash outfit Tyrannus have forged ahead, releasing one self titled EP in 2019, before embarking on delivering the 3 song demo “It Taketh” in 2021. This release gives the listener a taste of the progression and repression from their debut EP. A full length is in the works which will be unveiled in due course.

Opener “The Flood” unleashes an assault of rapid fire drums alongside an abrasive guitar tone which compliments the vocal snarl of Vocalist/Guitarist Callum J Cant. Some unexpected tempo changes are delivered as a groove laden beat takes the place of the Kreator style intro. Throwing the cloak of darkness into much less predictable territory is always better than the same shit you hear coming a million miles away. It works well, as well as the guitar solo that invokes a dream scape.  Title track, “It Taketh” is a full on Blackened Thrash banger, I hear lot of Kreator influence again but that probably says more about me than the band themselves! Anyhow, It’s good company in my humble opinion. “Lake of the Undying” ends the demo like the closing sequence of a movie, definitely a cool ending.

These songs are a good indication of what to expect from the bands upcoming full length as well as the live shows hopefully on the horizon for the future. (Skye_Dogg)