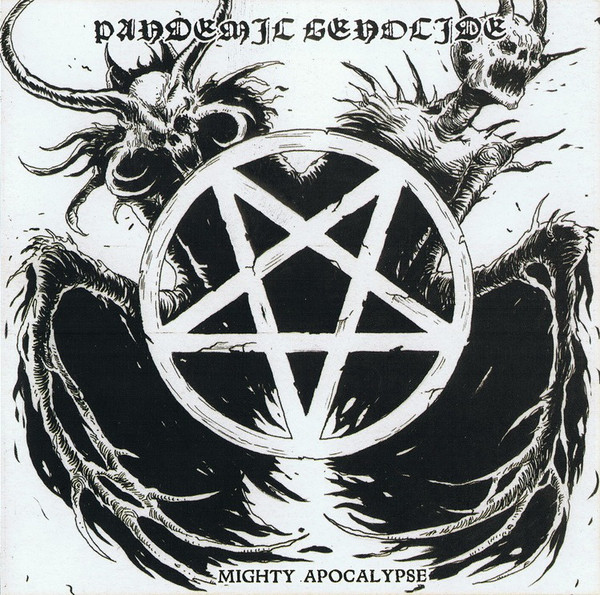 Seems like desolating winds keep blowing all over the mighty land of Poland, we recently received a promo from the quickly growing polish label Psycho Recs featuring one of those killer bands these guys seem to produce so easily, their name is Pandemic Genocide and are presenting their latest offering called “Mighty Apocalypse”, a full length album released back in 2010 after a four demos and a couple of splits.

Before playing the record, the art work announces through the legend Old School Death Metal that this, fortunately, may not be the trendy screamo metal core for kids that is the current fashion. I have always had a huge respect for the Polish underground scene, these guys seem to have shaped their own style, different to the Swedish or Finnish school.

The album open with an interesting intro which is basically made of some tombs combined with keyboards, pretty much like a march, nothing exceptional but cool enough to set up expectations about Pandemic Genocide stuff. Then and from that moment on, what I witnessed was a band performing a very well balanced assault of old school death metal, catchy, not obscure but always filled with this touch of evil these type of bands tend to have.

Even when there are parts pretty fast like the track “Satanarchy”, the truth is that the majority of the album relies on a certain type of mid / slow tempo death metal with lot of remark on drumming double blasts that are really well executed, the same with some guitar solos that have this old school feeling , vocally, this is pure low tone growling death metal, no screams or brainless pig squeals (thanks hell!!!). There are some passages where these guys like to use keyboards, I am not very friend of that but I must confess I didn’t dislike it because at the end, these brief appearances provide and exotic feeling to their music that is by definition pretty evil.

So, if you have been fan of the Polish death metal scene and want to keep  up dated on what is being done in such latitudes, this is a good  band to listen, honest, crude and pure Old  School Death Metal with the exquisite sound, if you like Decapitated or Dies Irae, you’re gonna praise on this one then!!! (Master Butcher)