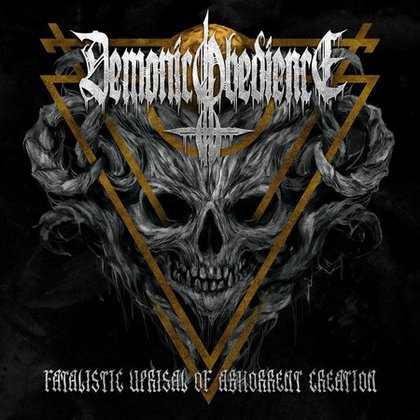 Since 2013 under the moniker of Demonic Obedience, formerly located in Greece, now in Scotland, this Death/Black entity goes for the straight in your face approach leaving no prisoners. Their 3rd album “Fatalistic Uprisal of Abhorrent Creation” is a nice example of face melting Death Metal with a Black edge, smashing razor-sharp riffs around the listener, always being able to change between atmospheric slow motion heaviness and high octane speed eruptions. The vocals are very versatile, so are the solos and the drumming which mostly plays in favor to the song without exaggerating in technical wizardry. There is a good dose of US/European Death Metal with lyrical content that goes more into Black Metal territory as well as some Black Metal riffing incorporated into the Death Metal wall of sound produced by the trio. A good album with tons of killers riffs, twists and turns, which in the end just lack of some outstanding moments compared to the beasts in the genre. Extreme-metal-fetishists should check this out. (DPF)