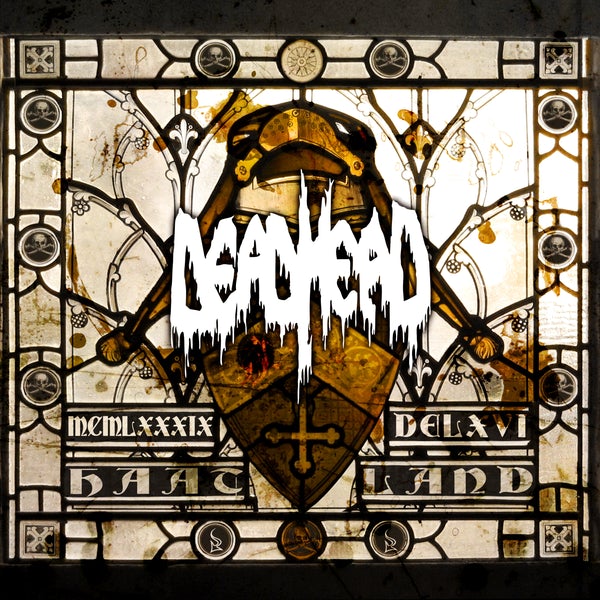 Petrichor, from Netherlands which runs under Hammerheart Records, surely got the eyes for hunting and exposing innovative art of enthralling quality. And, this time they brought some exquisite offering for the possessed followers of Kreator, Merciless, Sadus, Dark Angel, Possessed. May be the name, Dead Head, wouldn’t ring bells to many on lookers, but pity for those souls, as the band is up and running for over 30 years and has a worldwide, devoted fanbase.

Formed right back in the glory era of 1989, these Dutch maniacs established their raw, aggressive Death Thrash Metal sound ethic from the very beginning and released several demos, EP and full lengths, in their impressive tenure. Possibly came into individual exposure, after being participated in the now classic, “Where Is Your God Now…?” (1990) split with legends of Acrostichon, Sinister, Gorefest and Disfigure. After announcing their bewilderingly thrashy and hemorrhaging deadly sound, ensuing full-lengths “The Feast Begins at Dawn” (1991), and “Dream Deceiver” around 1993, forced all watchers to follow forth. Their later and now revered third length “Kill Division” (which also, received the worthy re-issue honor from Petrichor) further deepen their roots in this fiendish and forever uncompromising genre. Historically, their tradition of taking considerable time between each full-lengths maintained carefully and same happened before the cult-classic 4th full-length offering “Haatland” released around 2005 – in the time when thrash and death metal lost most of its naivety and unbending essence. Possibly to defy all that compromises around, in “Haatland” the four original members of Tom van Dijk (bass, vocals), Robbie Woning (guitar), Ronnie van der Wey (guitar), and Hans Spijker (drums), captured the most intense and brutal thrash-metal thus distilled their own way to pounding out each song, as if death lurking ahead and every minute could be their last.

Unquestionably, the outrageous drum-style of Spijker, ultra-thrashing double guitar-riffs combined with Tom’s all-pervading earsplitting vocal spitting, gave the band a well-earned status in the metal-scene of those days. No wonder, that was their finest old school Dead Head era and countless number of performances (can’t comprehend the blood-spattered pit during tracks as, “Phantom Palace”, merciless “Supreme Forgery”, “Last Server Down” “Serial Divorce” Or the sights when violent pitfall of manic falls throughout the playtime of “Dog God” “Desire” and nefarious “Nosferatu”!!!) throughout whole Europe sustained this, which appropriately made the band known and valued in the metal scene all over the world. However, as the pressed mentioned, it’s tough to swallow that this relentless and raving record somehow received poor distribution and prevented the band from living up to their potential. Die Hards and devotees would surely deny that with full-hearts, however, blessing to any old and unexposed souls, as in this year of 2022, “Haatland” is getting re-issued on 2-CD and LP with infusing production, so the all can re-acquaint itself with this magnum opus of sheer brutality and refined haunting melodies. Enticingly added with a ton of bonus material (all demos and studio outtake) which remastered by revered Erwin Hermsen at Toneshed Studio (Trouble, Pestilence, Malevolent Creation), the boosted production surely gives this whole raging slab of Thrash furthermore potency, which instantaneously ready to crush your skull. Certainly, could not be more teasing time to revisit their past or get acquainted with-your-jaw-drop, as the band is on the route to release their 7th full-length album in 2022 – to be unswerving with their tradition of releasing intense and aggressive Thrash/Death music for over thirty years. So, all unaware ones should behold “Haatland” again and get assured, why Dead Head shall be considered the one of the best and unheeded band, that they have been for far too long. (Rocky)