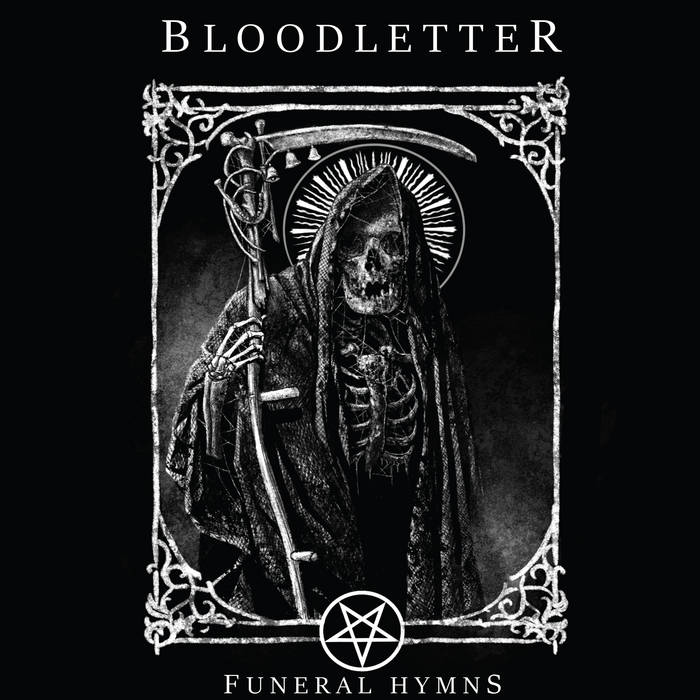 I’m drawn to the artwork for ‘Funeral Hymns’ as it doesn’t conform to the usual Thrash Metal stereotypes. If anything, this would suit a Black Metal album and because of that it gives off the promise and anticipation that this will be a very dark and hostile opus. ‘Funeral Hymns’ is the second studio album from Chicago, Illinois Thrashers Bloodletter and was released on all formats by label Petrichor at the start of 2021.

First impressions as opening track ‘Absolution Denied’ kicks into gear are that of a band with a forthright and direct style that motors forward through the use of catchy free flowing riffs, a powerful and energetic drumming style and some interesting and engaging guitar rhythms. As you might expect, the vocal work on offer is powerful, with a little filth under the metaphorical fingernails, whilst the bass play is solid and intricate. There are even a few flurries of intense riffing and guitar solos to get your teeth into as well, so all the ingredients appear to be present.

If anything as the album progresses through ‘The grim’ and beyond, things get faster, more aggressive and yet always measured and controlled. Bloodletter are a tight sounding band and everything feels precise and on point. On to the downsides and this album has little to no variation; just hyper fast riffing of a high quality with little in the way of melodic divergence or tempo changes. So whilst lyrically the bands real life grit and candour gets you so far, the album does slowly begin to drag and lose its charms as it ploughs forward rapidly.

I’d still recommend giving ‘Funeral Hymns’ a listen though as its written and performed to a high standard. Going forward I would like to see the band try to change their sound up a little though.