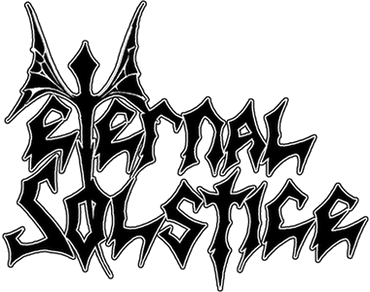 Earlier this year ETERNAL SOLSTICE delivered their fourth album, after a period of silence. Of course it is in the style of Eternal Solstice, but some differences are noticed…curious about the resurrection and this new Eternal I decided to have a chat with Ramon, founder and die hard frontman of the band. (Doc H.)

Hey Ramon, How are you doing? Congrats with the new album, its awsome ! There have been a lot of changes between the end of Eternal back in the days and this new start, for example I saw you playing guitar instead of the bass like you used to. What happened with the line-up ? And what are the biggest changes according to your own opinion?
Well well, Misha and I started writing new material for the album while searching for new bandmembers but unfortunately we found ‘m after the recordings were done so we did the album all by ourselves. We were looking for two guitar players but were only able to find one. But I’m very happy with Ardy de Jong on lead guitar. We found a bass player in person of Tim Roeper and since I did all guitars on the album it was easy to switch to guitar. It works well.

All over the world the metal heads are familiar with a lot of Dutch bands, the early scene made a big name for itself. Of course a question that surely pops up many times, you’ve been a part of the very strong Dutch death metal scene back in the late 80’s and early 90’s..Why do you think it was such a great scene back then, and what do you think of the Dutch scene now these days?
Back in the day’s it was new fresh and original. Nowadays there are a lot of bands with a lot of different styles not sure what to think of it really. Some I like some I don’t.

Listening to your newest, comparing it with “The Wish…. ” I hear a natural growth, how did you start the writing process for this new album, with a clear vision of what it should be, or did you go with the flow?
We just jammed a lot and recorded those sessions picked the best parts and wrote additional parts. It worked out well. Next album will be written the same way and with new band members I’m curious what their input is. Old school definitely. We really did our best to write ‘songs’ not just tempos with heavy guitars. We tried a little melody here and there like we did in the past but I think we sound more mature now.

How did the re- start of Eternal Solstice happened?
Back in 2010 Wayne from Decrepitaph asked us if we wanted to do a split 7″. Dark Descent Records was interested and we had a few songs lying around so it was a good opportunity to record those songs and release ‘m. So we did a split 7″ with Decrepitaph and a double split 7″ with Pentacle. In the meantime Dark Descent released our debut album on vinyl and that’s why I got in contact with Misha Hak again….the rest is history

I saw you guys do your live stuff, it was with a lot of power end some kind of aggression in your performance, what is your drive after all these years to go on stage again?
Don’t know hahaha !!! Something inside me says we have to do it. I think it’s important to be a band on stage and perform, not just do what you do in the practice room. We’re not quit there but we are working on it.

What made you decide to switch from Vic Records to Dark Decent Records ?
It wasn’t a switch really. Dark Descent started it all again for us. Vic was interested in re-releasing our first two cds. That’s it really.

On the back of the booklet of “Remnants…” is a picture of you and Misha, as Eternal Solstice on this album. Is it a choice to be the band with you 2 guys and keep the options on a next album open for different musicians, or do you now have your formation complete and will they join on the next album as a permanent band member ?
As I said before we just couldn’t find new band members prior to recording and even prior to finishing the layout of the album, so we had no choice to present ourselves as a two-member band. But with Ardy and Tim in the band the line-up is complete and they are full members of Eternal Solstice. To be honest this is the best and most motivated line-up we ever had.

You write the lyrics of Eternal Solstice, How do you choose your topics, and what is it all about ?
It’s mostly about things that annoy me or pisses me off, like religion and people imposing themselves upon others etc. mixing those lyrics with other subjects like death and diseases. I try not to make statements, I don’t want to change the world, that’s already far beyond saving.

What are the future plans of Eternal Solstice ?
Doing some gigs. We just started writing new songs for a new album or EP not sure what’s next but there will be a full length in the future. Can’t wait to hear the input of Ardy and Tim.

I see your name popping up on a VicFest poster, can you tell me what is it all about ? and are we going to see you on some more of those fests ?
I have no idea what you’re talking about hahaha !!! Yeah it’s a festival with bands that released something on Vic Records, loads of cool bands. We played one Vicfest already and I’m sure more will follow. The Idea came from Dead End’s bass player Alwin, he tried to join a lot of great bands from the early days, and because Roel ( Vic Records ) releases a lot of old demo’s and stuff from old bands, this connection was quickly made. So in different venue’s you can enjoy different packages for example Pentacle, Dead End, Stormgrey ( from Lithuania ) will play 11th of September in Eindhoven, and in Gouda Dead End, Vissionary666 ( ex Altar ) and Officium Triste play on the 9th of October, we ourselves just did one with Phlebotomized, Burning Hatred an Anarchos in Uden. And next time you maybe see Eternal Solstice, Pentacle, and Vissionary666 somewhere on a bill, that’s kind of what’s it all about. I believe it’s now some 7 VicFests confirmed, so keep your eyes on that one, it’s very cool and I believe the format works great.

Some last words to our readers ?
Thanks for reading the interview, check us out on the internet or live!!! Cheers!!!