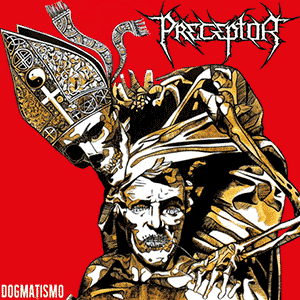 I ’m not sure if this is a re-release, the album originally came out in 2017, and even though they have a list of labels on their facebook page almost as long as my beard, I either have no idea what is going on, or I am extremely late in getting this one done. Regardless, let us get stuck into the music that these Brazilian mad kunts have made here without any further ado shall we!

Death Metal is the order of the day, and some impressive stuff is to be found within. Opener “A Pesto” leaves you in no doubt about that, and it certainly doesn’t sound anything like a mix of herbs and pine nuts that you may add to a chicken dish. No, it sounds more like a great mix of OSDM that will actually KICK you in the nuts. Rough and ready, all set up to give you those kind of feels you got back in the day when you listened to the very beginnings of the genre, or if you are new to Death Metal, just simply great stuff to hear.

Track three, “Maldição” has that perfect kind of intro that gets the blood pumping straight off the bat, and when the riffs kick in one can only say, well fuck yes, this is precisely what I want from my music, and the pattern continues for the rest of the album. “Preceptor” is one angry motherfucker that comes at you full tilt, with no prisoners taken. The levels of tone and aggression have been set, so there are no particularly huge surprises to be had, just moments of sheer riff orientated bliss, like “2810” for example. I don’t know if it’s their postcode or the numbers to a combination safe holding the wisdom of ages, but fuck me that bass is thundering along under this, and all of their songs like a weapon of mass destruction.

“Poseidon” is simply crushing. The god of the sea, and also earthquakes, and horses funnily enough would highly approve. This song has a rumble to it that is punishing to say the least, throw in a tad of D-beat on them old drums and you have a song that is very hard not to like! Title track “Dogmatismo” I can only imagine as being about religious dogma crossed with a fucked up sense of machismo that can only come with shoving things down people’s throats, is another fine example of the levels of brutality that Preceptor can provide. Yes, Old School indeed, but without a single hint of pretence,

I’ll finish with the closer, “Depression Field”, and what a fine way to close out an album this is. MId paced Death, riffs to die for, chunky and resolute in delivery. Preceptor have some skills, and all of them gravitate towards giving you, the Death Metal fan, one hell of a great time. A big yes from me, I kinda like these mad Brazilian kunts! Hell yes to that! (The Great Mackintosh)