Aeon of Disease – The Edge of Purgatory [EP] 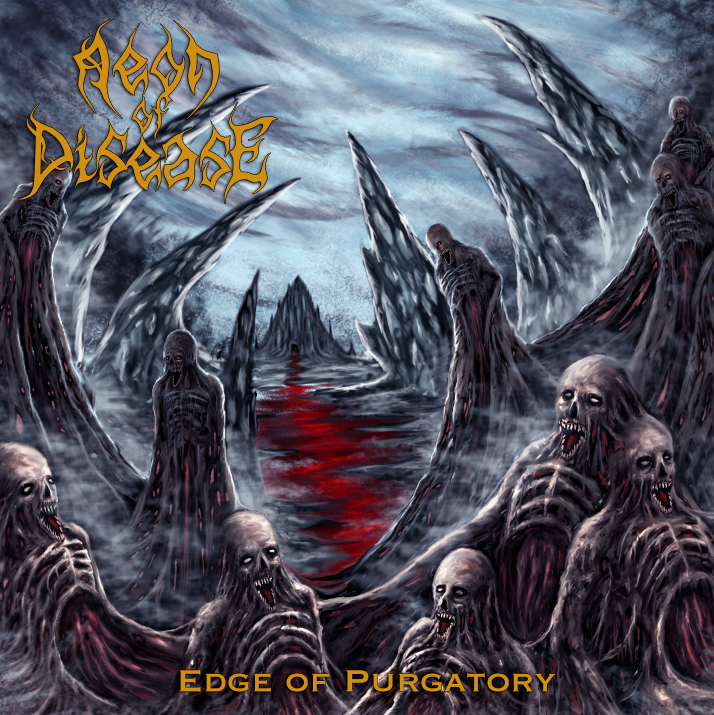 I had the pleasure of reviewing the last Aeon of Disease album, and you can check that out here to see what I thought of “Veil Of Oblivion”, or you can just take my word for it that it was indeed a very strong release. So what have these fine Germanic lads been up to since then? Let us bloody well find out then!

Well, obviously they have been recording some new shit, because otherwise we wouldn’t be here. Yes, “Edge of Purgatory” is the title, and although it is not the full length that I would have liked to have seen them do next, it sure as shit is a worthy addition to what is fast becoming one hell of a rise through the Metal ranks. A closer inspection is well warranted, and that is what we are about to do.

The first track, funnily enough being titled “The Edge of Purgatory” will suck you in if you are a fan of the more melodic style of Death Metal, it’s good, but track two “Artifacts” is where it all starts for me. A bit of melodic guitar before the freight train arrives and crushes all your stuff that you stupidly left on the train track. I stated before in my previous review that these guys are capable of giving you, the listener, an arse whooping, and on this one they do not disappoint. The vocal switch up is just perfect, and those riffs, oh those riffs.

“Ominous Signs” continues this trend, and lays the boot in a couple of more times just for the hell of it. Rolling riffery, a cacophony of percussion, to the sound of a man possessed by hatred. This is some seriously good shit right here. Can it get any better? Yes, yes it can. “A New Age of Terror” ramps it up even more, opening with the kind off riffery that would not be out of place on any classic Thrash album, they then proceed to batter you around the head with a massive wave of sonic fuckery. This is class, and it just keeps on growing on you.

Yes, they may sound a little Amon Amarth, and a slew of other Melodeth bands at times, but I defy you to not love “Fathomless Instincts”, it’s the kind of song that makes you want to get up and conquer your nearest nation, and that’s a fact. Ancient armies would have marched to war with this kind of shit, with pure heart, pure mind, and a winning glint in their eyes. To me it’s like hearing the machinations of a war machine, the song may well be about puppies (spoiler, it’s not), but the feeling as it rolls over you is intense to say the least.

“Schizophrenia” is brutality at it’s finest, and the more I hear this album, the more I think they are leaning way more to the Death side of things. Sure, they have moments of sheer and utter bliss with the guitar play, and it is a beautiful thing to behold, but these are fleeting, and they then, as I have previously stated in my last review, bring the hammer down, and this time the hammer is one that Thor himself would struggle to pick up.

Closer “Iron Domination” has an almost Bolt Thrower appeal to it, and I do not say this lightly, as they are one of my all time favourites. The tone sets the mood perfectly, and then this fucker rolls over you like a Panzer, not too fast, not too slow, just perfect. You are now flat, and dead, with heaps of blood oozing from your paper thin skull, but you have a smile on what is left of your face. This is good. So good, and on my last review I stated that these guys were not perfect, but have a hell of a future ahead of them. The future is now, this is as solid a release as anyone can have, and you have to give this a shot, or miss out, and then you are liable to be called a fucking idiot. A huge yes from me, well done guy’s, superb. (The Great Mackintosh)