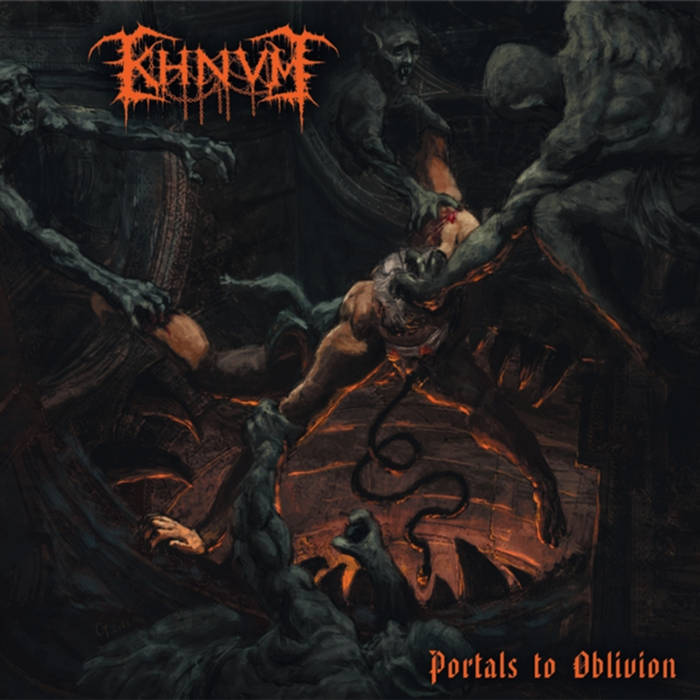 When the great nations of Germany and Bangladesh combine, furious Death Metal is the by-product. Okay so not a usual combination but both countries have a history of great bands, so this has the potential to be rather good. ‘Portals to Oblivion’ is the power trio KHNVM’s second album, and their first with Neckbreaker Records who have unleashed said album on CD, and later also on LP.

A melodic introduction track entitled ‘Ethos of the other World’ starts the album off with a decidedly sub-continent flavour that in no way prepares the listener for the rhythmic chugging riffs and battering drum tones of the opus title track ‘Portals to Oblivion’. Deep growling vocals soon make an appearance and there is a steeliness to the guitar leads that adds a nice degree of edge to this albums overall sound. In some ways the brittle, quick natured riffing reminds of Nile, especially in the urgent vibe that the guitarists manage to create through the use of extremely high quality technical musicianship.

This album is a dream for those who love a technical edge to their Death Metal. Guitarist Obliterator has such a deep well of talent and imagination to draw upon. His solos are packed with flair and panache, his guitar leads are stirring yet hard edged, and his rhythm work is intense, always so intense.

Away from the guitars though and drummer Cassius has a satisfyingly measured style; he creates anticipation and suspense often (Listen to the title track for a definitive example of his skills) but is equally adept at bludgeoning, unwavering fury. And this brings me on to the overall songcraft of the band; the album is so well constructed and has myriad avenues of sound and texture to get lost within. I love slower, intensive Death Metal and KHNVM create this style so well but at the same time have bouts of explosive rushing aggression that contrasts magnificently with their more thought provoking style.