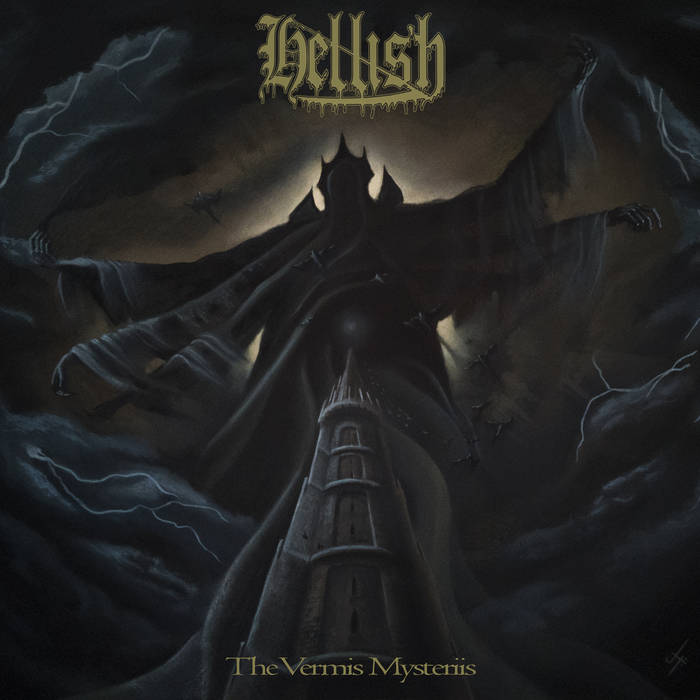 It was early in the year 2015 when I first heard of this Chilean Thrash Metal band called Hellish, through their ‘Theurgist’s Spell’ 7” EP, released by the ever-dedicated Blood Harvest Records. This EP had four tracks of non-conformist Thrash Metal with a clear penchant for early Sodom, Kreator and Sepultura. The slightly Blackened sound worked very well on these primitive headbangers. Now, a good seven years later, the band released two full-length albums and a hand-full of smaller releases as well. This ‘The Vermis Mysteriis’-EP was released on cassette tape at the very end of last year, but only got the vinyl treatment earlier this spring. And, not exactly unimportant, it is a prelude to the third album that will be released later this year via Dying Victims Productions.

With this sort of music the fun thing is: it never changes, it always gets me going. It has all the same ingredients like all the other bands, from back in the day and of those that are still playing this style today. The rapid riffs, the simple melodies, barking vocals with off-tune falsetto screams and catchy sing-along choruses, the basic drums and above all, the spontaneity and energy. Who cares if things aren’t as tight as The Haunted or The Crown? This is just the sort of primal metal that has all the vital elements of the genre ingrained. And, frankly, this is the sort of primitive metal that got me into the genre to begin with. Those who, just like me, have the fondest memories of diving into the 80’s (extreme) metal scene and hearing bands like Exciter, Possessed, Slayer, Helstar, Holy Terror, Whiplash, Rigor Mortis and Hallows Eve for the first time, will be served at their beck and call with Hellish. Their goal is made even clearer by a skilfully executed cover of the criminally underrated Necronomicon (‘Dark Land’). But, no, of course, nothing original, and that was obviously never the intention to begin with. This is a worthwhile, well-executed and endearing homage to everything that’s great about 80’s metal.