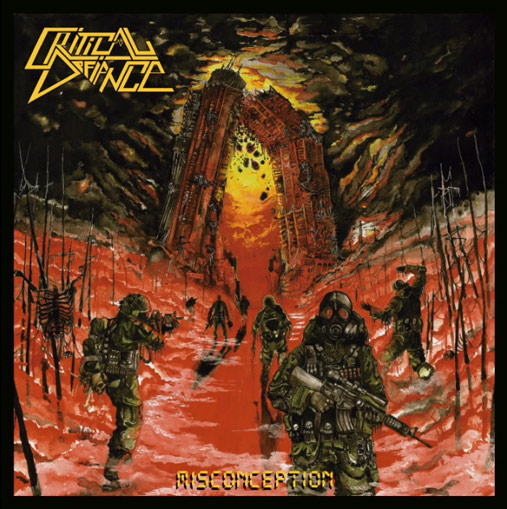 For my first listen of this album I settled down into my comfy chair, headphones at the ready, hit the play button and was blasted straight back outa my chair. This album comes at you at a manic rate of knots. A full-on blitzkrieg if you will and will absolutely beat you within an inch of your life.

Critical Defiance originate from Chile and this, their debut album, is choc full of chugging riffs mixed  with full on ripping guitar solos, and then when you think it’s done, even more gigantic riffage. The vocalist spits out the lyrics in such a way that will provoke violence on even the quietest night at home and it also delivers drumming that’s thunderous, relentless and an onslaught of your eardrums.

“Desert Ways” kicks this wall of thrash off with about two minutes of instrumental noise that lays the foundations superbly before the hostile offensive of this album begins in earnest.  “Spiral of Hatred” brings even huger riffage, angry vocals and ferocious drumming. For the record, the bass player has my sympathies keeping the tempo and melody thumping along with the drumming, but he does it and does it tremendously well. There are some very cool tempo changes through this track and indeed through the whole album just to change the tone a bit. Or the band needed to rest a bit which I wouldn’t begrudge them that after relentless tempest that is this album.

A classic example of these tempo changes is “04 507”. This is an instrumental track of uncontaminated metal chord changes and some damn fine lead breaks all held together by a thumping melody and this marvellous combination drives the whole track along brilliantly. “Onset” is probably my favourite track on the album. Chugging riffs that just make you hammer and wrench those neck muscles until a visit to the chiropractor is required. If you think you’re an air guitar aficionada try your hand at this track. You will need to learn a couple more moves just to keep up. If you’re a Playstation Guitar Hero think red, green, red, green, yellow, red, yellow, green in quick succession and go for that 50-note streak. “Misconception” brings an end to this mammoth album however all it takes is a press on the play button and off we go again on this joyous ride. Something I’ve been doing with regularity I’m proud to say.

Although the sound is based in the 80’s bay area thrash scene, there is something more to this album. Yes, its thrash, yes, it’s got truly great riffs and melodies but there’s more to it that I just can’t put my finger on. Maybe it’s got more attitude, maybe there’s more technical ability from all the band members or maybe cause we in 2019, there’s just more emotion and intensity. Think of all the great riffers and axeman that have graced metal and this album easily equates with them. Although its only early in the year, this might already be in my top ten for 2019.

This not an album to contemplate the world’ issues or listen to just before you hit the sack. This needs to be played very very loud.  Is it anything new? probably not, is it good? you fuckin betcha. (Longstretch)