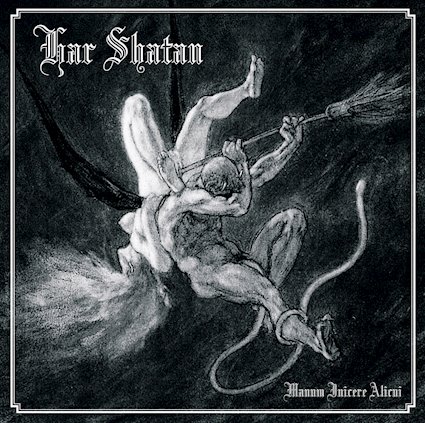 Its been more than a decade since German Black Metal one man project Har Shatan have been active; 2009’s ‘His Legacy’ to be exact. That was the projects debut album and it came on the back of a handful of demo and split releases over the preceding six years. Now though Har Shatan has risen from the grave with a brand new sophomoric full length release entitled ‘Manum Inicere Alicui’ which in Latin means to lay hands on someone, and has been unleashed on both LP and cassette by Finnish label The Sinister Flame.

Having a new album that has been anticipated for so long, you can forgive Har Shatan for building into this opus slowly. In fact the opening ‘Intro/Aurora’ combination builds suspense remarkably, and the inclusion of some cleaner chanted vocals mixed in with the rasping Black Metal once, plus the stark, building nature of the guitar tones actually put me in mind of Reverend Bizarre, if the Finnish Doom lords decided to swap genres that is. It may sound off, but I definitely hear the RB influence and to me it works a treat. Of course the core Har Shatan sound is pure Black Metal; predatory, dark, but also grimly melodic. The whole first track feels like its building to something; like there is a dark force brewing just out of vision.

And indeed something is brewing; the far more conventional mid-tempo and mid-90’s sounding tones of ‘Fulgens et Sole Clarior’ which for the first time lets the bass tones lead the way with rigid pummelling force, and a wonderfully flowing yet understated synth undertone also makes an appearance. I can’t help but get a whiff of Isengard and a taste of early Burzum when I hear this tracks bass heavy rhythms and simple riffs, along with its crashing of symbol and murky drum tones. This right here is my kind of Black Metal; raw vocals, a driven forging guitar sound as well as a deeply atmospheric backdrop.

As a palette cleanser there is a calming yet vibrant dark Ambient interlude track simply entitled ‘Secret’, and this leads into ‘Loyalty Until Death’ and a surprising change in feel to the album, as Har Shatan introduces a slow, distortion cleansed and slightly more lo-fi sounding track that focuses more on the harsh, grating vocal work which take centre stage and force the perspective firmly onto the powerful, menacing words being spat out. That being said, about half way into this ode to raw noise, the reverb drenched guitar leads get their moment in the gloom before the re-emergence of chanted vocal work and the inclusion of some hypnotic synth work, giving ‘Loyalty Until Death’ a bleak and ritualistic aura.

Out of all of the songs on this album, I’d say that Blood of Creation’ is easily the most orthodox Black Metal song of the lot, featuring as it does a fast paced barrage of wind swept riffs,, muffled blast beats and an overtly cold mood to it. In stark contrast to that, ‘Lichtträger Lucifers’ is the albums catchiest track; mid tempo, simple plodding drum tones, heavy bass and absorbing icy riffs. And to finish, a haunting slice of Dark Ambient and soft guitar melody to re-settle the heart rate.

This album gets released on the last day of the year, and what a way to blow this year off than with this beast. It has sadly come to me too late to be in my official albums of the year list but let me assure you, it’s top 10!