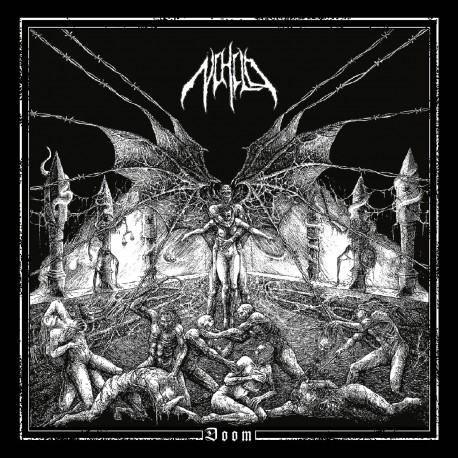 So, Ricardo and I where having a random chat the other day about dismembering babies, sacrificing young ladies to the gods, wiping the planet clean of all scum and starting a new world order, the kind of shit us Metal heads normally speak of, and then he just drops this fucking album in front of me, out of the blue, and says “Is this something to your liking?”..Like he knows The Great Mackintosh or something! How bloody dare he!! The sad part is, that although we have only been talking for a while after he let me put my dribble on his wonderful site, yes, he has me well figured out haha. That in itself is not a bad thing, horses for courses and all that shite, and my main course is Death Metal.

Nihilo hail from Switzerland, the home of holey cheese, the birth of the whole Fondue movement, and they play a variety of that other thing we like called Death Metal, in all it’s HM-2 soaked glory. Switzerland is famous for other stuff too apparently. Never been there, so I really can’t comment. But, I CAN comment on this band, and that I will. First thing that struck me was the name. ‘Nihilo’ means nothing, or to put it in better perspective, the term ‘Ex-nihilo’ means ‘out of nothing’. Makes this all a bit awkward really, because this band is so far from nothing as to make the gods themselves question their shitty lack of existence.That makes no sense at all, but hey, stick with me.

Nihilo exhibit some of the behaviour of your typical native Swe-Death band. Yep, many an HM-2 may have been used to create the sound that they produce, yes, it’s as heavy as a ten ton lorry full of dead possums parking on top of your smart car while you are in it, but they certainly do know how to inject some flair into their tunes. I am unaware of their past, and choose to remain that way until his review is over. They may once of been on Eurovision for all I know, don’t fucking care..

At its essence, “Doom” is not at all a Doom album, although the subject matter may be somewhat depressing if you look closely into it. “Doom” is an absolute belter of a Death Metal album, and while at times it sticks to the tried and true methods and regulations that all good Death Metal must aspire too, it has a certain level of originality to it that is extremely pleasing. Track one, “Abuse of Confidence” builds with the intensity of a man about to seriously hurt someone, and then just gets plain riffy as hell. Oh my, the awesomeness haha, but rest assured, it still steps back into the realm of Death, the one we all love.

As an example only, and because Ricardo already tells me I waffle on too much, I’d suggest track two “Death Prevails”, then “Menace of Wrath” then, well fuck. The whole thing is just insane. Such mastery, such greatness. Title track “Doom” is the penultimate ending. All aspects of talent on display, and all guns firing. You don’t get this shit? You are not ‘into it’? Go and have a good hard look at yourself then, and question what you really want out of Death Metal. This is as solid as a good outbreak of the plague. You will either get it, or you can just wander around for the rest of your life being a tosser. ‘Nihilo”, nothing? I think not.

Haha, just kidding. Don’t be a tosser, listen to Nihilo, they will make your fucking day! (The Great Mackintosh)