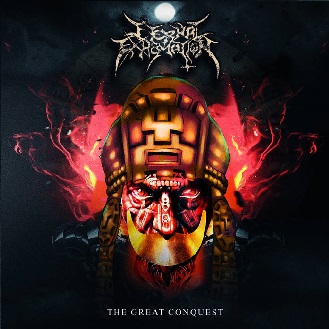 A single word can define the sound of Eternal Exhumation: crushing. This war machine appeared in 2004, but it is between 2017 and 2018 that they have begun to have greater notoriety after the release of their debut album “The Great Conquest”.

While this full length appeared last year on digital platform, this year has been edited in physical. From the first theme, “Mother Killa”, you feel the blow on the forehead. Riffs quite elaborate that run the entire mast, without reaching the exasperating maths of ultra-technical Death Metal. In other words, the band has an excellent job on the strings, without losing the innate sickness of the style. Even a great martial sensation is felt in each theme, which gives the precise forcefulness to his style.

It is interesting to note the influences from which Eternal Exhumation is nourished. A true Death Metal fan will be able to relate to the band with master bands like Immolation and Nile. Both have their own characteristics, while Eternal Exhumation has the elements of both, but worked with an own brightness. On top of that is the South American tint that is born with total naturalness in the bands of this side dedicated to the immortal Death Metal. That is to say, as a reference, Nephasth, Rebaelliun, among others. The relentless drums and the bestial guttural voice are a call to war and it is not an exaggeration. Clear case of this is the theme “Hymn to Wiracocha”, that within a few seconds of having started vomit the name of the Creator God in pre-Inca mythology and, after this, the sound blast crashes you against the wall. By the way, it should be noted that all the lyrics and the proposal of Eternal Exhumation focus on the pre-Inca past, the old civilizations of South America and the rejection of foreign divinities.

Undoubtedly “The Great Conquest” is an album that does not go unnoticed and can easily position itself on the international Death Metal radar. (MarioR)