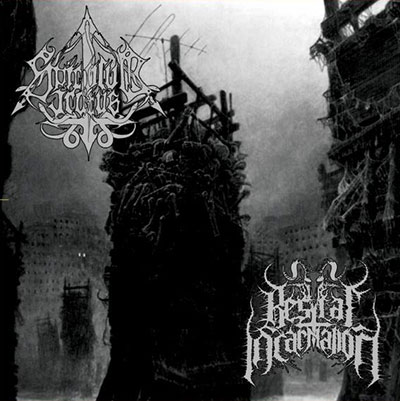 Two Californian bands set out to battle the holy minions on this well-packaged little split between the relatively unknown Spiculum Iratus and Bestial Incarnation. Entitled “Monuments of Decimation” the music featured within is your usual black metal affair with those same old Nordic-styled riffs, possessed vocals and tinny drums that you have heard a thousand times over, unfortunately lacking any kind of substance or sense of real adventure to enable either of these acts to stand out in their own right.

The first seven tracks of this disc belong to Spiculum Iratus and sound like a cross between “Fran Marder” era Arckanum and the first couple of Burzum LP’s, stirring up some descent-sized blizzards on the likes of “Sky Burial Requiem” and “Scrolls of the Dead”. Hypnotic though often poorly executed, these tracks do occasionally make you sit up and listen although they do tend to outstay their welcome loosing most of their initial grip and eventually fade into the obscurity from whence they came. Shame really. Bestial Incarnation are by far the better of these two bands harnessing a much more abrasive, varied and all encompassing sound than that of Spiculum Iratus. Complete with a much better production and an altogether tighter instrumental performance these five tracks sound like a cross between early Leviathan and Endstille, incorporating the dissonant atmosphere of the former and the war-like pace of the latter, which although may not be what you’d call original nevertheless shows some amount of promise from a band well worth checking out.

A decidedly hit or miss affair “Monuments of Decimation” is not exactly what you’d call an essential black metal purchase, although some of you USBM fanatics may find something in these 12 tracks to soak your appetites. For me, however, this is just far too generic to stand out in a genre where by today’s standards you need to be something really special to make an impact. (DaveW)