Rancid Cadaver – “Black Legion Records wrote “Denso y sucio como mandan las escrituras!” which roughly translates to “Dense and dirty as the scriptures command” which we all got a kick out of. If you’re reading this, cheers for one of the most unique reviews”

I’m loving the amount of filthy OSDM coming out of Scotland these days, and I got the chance to speak with Conor of Rancid Cadaver. He tells me about surprising YouTube comments, Invasion of the Body Snatchers, the Mets baseball franchise and signing with Dry Cough Records. (Marksson)

Greetings from Cumbria. Thanks for taking the time to answer my questions. How is life in Glasgow right now?
Hey, thanks for having me, always stoked to be a part of any form of zine/blog. Life in Glasgow musically, could not be in a better spot right now. Music is thriving with so much talent, with the active gigging/recording bands and some of the new projects just taking form. There has never been a better time to jump in and get involved if you play any combination of filthy, macho, evil, lemon biting, primitive riffs. Outside of music, The Mets are having a great season so can’t complain.

In April this year you unleashed your debut EP, ‘Flesh Monstrosity’. Now the dust has settled, what are your thoughts on your first offering?
I can safely speak on behalf of me and the rest of the guys and say that we are thrilled to have put out something that all of us would actively listen to if it were another band. I think half the battle of making any sort of media from games to art is ultimately doing something you yourself actively would enjoy and get a kick out of which sounds pretty self-explanatory, but you’d be surprised haha.

What kind of feedback has the EP received so far? Any comments or reviews that have stuck in the memory?
We are extremely overjoyed at how well the EP was received; we couldn’t have imagined it going over any better than it did. It’s something we never take for granted and we have the biggest appreciation for anyone who took the time out to listen and let us know their thoughts or drunkenly told us “Nice set, smashed it”. There’s one particular comment we received on YouTube that became quite infamous in the band. Black Legion Records wrote “Denso y sucio como mandan las escrituras!” which roughly translates to “Dense and dirty as the scriptures command” which we all got a kick out of. If you’re reading this, cheers for one of the most unique reviews. 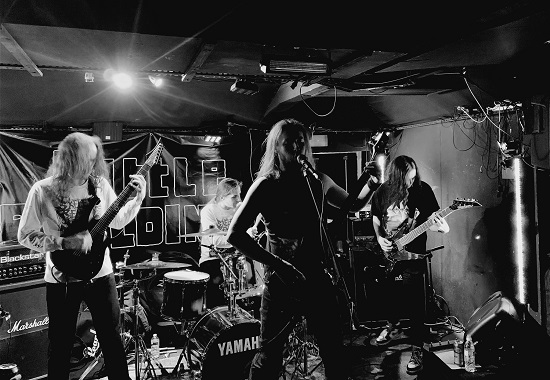 In my opinion your work centres around more man made horrors, for example ‘Genetic Enhancement’. Can you tell me more about the lyrical themes and musical influences that have gone into the EP?
I think Flesh Monstrosity has a fair few flavours of horror in there, Genetic Enhancement definitely is a man made horror if you fear getting Hench. The thought process going into that song was “Lets write a song about getting as inhumanly ripped as possible”. Flesh Monstrosity and Bog Rot are more synonymous with typical body horror, Bog Rot for me in particular always reminds me of the scenes from Invasion of the Body Snatchers (1978) where the alien plant would take over the bodies.

I’m looking forward to seeing you live in Hartlepool later this year. Have you been gigging much on the back of the EP release? Any shows that particularly stick in the memory so far?
We’re extremely stoked to be heading back down south for our first ever headlining show. We’ve had a few gigs after the release of the EP and our line-up change which have all been received extremely well. As I mentioned, we played a sold-out show at Little Buildings in Newcastle which was an absolute blast. A host of killer bands and a great promoter.

Do you have a follow up release planned? What details can you share regarding this?
We definitely have a few things in the works right now, some stuff is still festering but rest assured there will be more filth and a full length coming.

‘Flesh Monstrosity’ was released through Dry Cough Records. How did this collaboration come about?
Before even beginning Rancid Cadaver, me and a few of the other guys were already fans of a whole host of the bands on Dry Cough like Mortuary Spawn and Slimelord. We had a few offers from some other distros until through word of mouth our name reached Dry Cough. That opened the window for us to begin talking, we sent Andy over some of the demo tracks we were working on and the rest is history. Couldn’t have asked for a finer label for our debut.

I’m loving the Death Metal coming out of Scotland right now. Which bands should we be checking out in your opinion?
As I mentioned earlier, the scene right now is insanely good. For a crash course in Scottish Death Metal you should be checking out Coffin Mulch, BrainBath, Penny Coffin, Rend Them Asunder as well as some of the heavy hitters like Scordatura and Party Cannon. Don’t take this as an exhaustive list however, there is always more out there to be discovered and more bands jumping in and getting involved which we welcome with open arms. 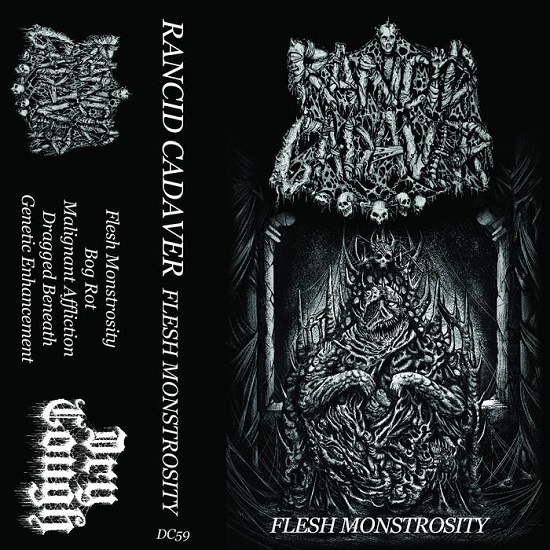 What do you hope the next 12 months have in store for Rancid Cadaver?
1) Long sleeve shirts. 2) New recorded music. 3) Mets win the World Series & 4) Forbidden Planet Sponsorship.

That’s all I have for you. Thanks again for taking the time out. The final words are yours.
Thanks again for having me, it has been a blast. Big shoutout to everyone involved in organising gigs for us like Macho Records and At War With False Noise and everyone involved in any aspect of Scottish music. Biggest props to anyone who has ever came out to see us play, bought any merch or just came up to us to chat, we are more than grateful for any reception we receive and we hope to continue to defile ears.

“Never relax, get evil all the time, live for violence.”