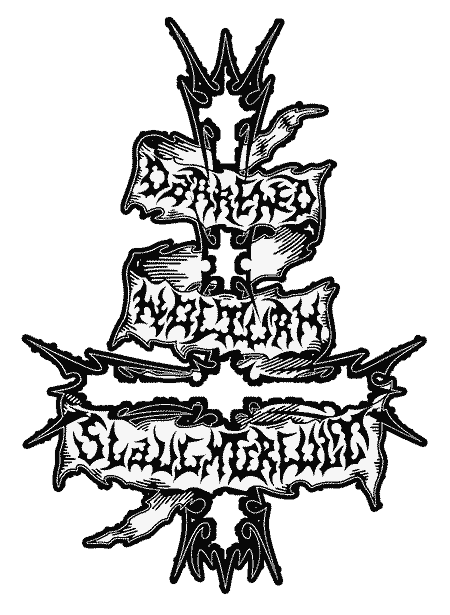 After reviewing Darkened Nocturn Slaughtercult’s second effort “Follow The Calls For Battle” I got an e-mail from the band, some contacts ran over and over, and this resulted to this interview. We are proud to be one of those chosen few who actually had the honour to interview this great band. Which is definitely one of the most intense and best blackmetal bands to hail from the Germaniac country, and they on their way to become one of the leaders of the European blackmetal scene. All hail for the Darkened Nocturn Slaughtercult… (FelixS)

Hail! So, how are you these days?
Oh well, making the best out of the daily hell called life.

Darkened Nocturn Slaughtercult has been quite busy lately. Give us an update!
After taking some time off during 2003 we’ve returned with new strength and vigour. The latest release in form of a split LP with Luxembourg’s Donkelheet has been unleashed several blasphemous months ago. Once more unchained by Black Blood Prod. limited to 666 bestial copies. A venture into dark depressive solitude. Currently we’re working on the last final touches of the all new third devastating slaughtering opus. Hopefully, after having to postpone the release date due to time conflicts – the next infernal chapter will be ready in some weeks. Furthermore we agreed upon playing more bloodstained live battles. The slaughter will continue…

The full-length album you put out half 2003 was quite a success. The vinyl version was already sold-out in a few weeks. What do you think is the reason for your sudden popularity?
First of all,… merely the gatefold version and later on the tape version was released in 2003. The actual album itself was released back in 2001 ! Originally in form of a self financed as well as self produced CD – just like “The Pest…” in 1999. Furthermore, you should not speak of sudden popularity. Afterall, by now we have been on a “crusade” for seven unholy years !!! Most important to us, we’ve reached our current status due to our own strength and will power. Co-operating with labels – as in releasing vinyl versions – certainly helped. Bottomline is that Slaughtercult stands independent literally upon it’s own cloven-hoofed feet.

How were the overall reactions on “Follow The Calls For Battle”?
Throughout the world wide black metal “scene” “Follow…” has spread like a virulent fungus. Thus we have received praising comments from every continent. As “The Pest…” placed the foundation stone in 1999 some individuals already were aware of us. Nowadays there are not many hordes which survive the first release. “Follow…” proved that Slaughtercult has carved the conspiracy for raw Black Metal deeply into its blackened heart. It was flattering, but not surprisingly to all of a sudden receive close to two dozen contract offers. Furthermore there has been a constant demand for live battles…having insight on this broad overview you can judge yourself how the reactions have been.

The new split LP with Donkelheet has just been released. The release has been postponed due to something with the wrong sleeves, right?
Has there ever been a Slaughtercult release on time ? Is there really a dead line ? There was nothing wrong with the fucking sleeves. Donkelheet decided to change their cover in the very last fucking moment. Ofcorpse this delayed the release a bit. The manufacturing plant caused some minor problems as well. Thanks to Black Blood’s dedicated work everything has turned out 100% to our liking. Mighty hails to this superior Italian label !!!

It has been released now in the right form. Did you already got some feedback on the split LP?
The feedback has been excellent so far. Although the track itself is a bit more monotonous and more primitive than for example “Follow” material, it contains the Slaughtercult spirit nevertheless. Some call it our best track so far as it captures more atmosphere than the previous hymns. In combination with Donkelheet’s track “Emptyness” – “Underneath Stars of the East” unites to quiet a powerful old school atmospheric black metal release. That’s exactly what we have received as feedback.

In what does the last recordings (from the split LP) differ from the full-length?
The difference between the 2nd chapter “Follow…” and the split track “Underneath…” ? Well, the album is a straight forward all guns blazing black metal assault. The split LP is based upon a more depressive approach. One rules with iron fist. The other convinces and overwhelms by sheer atmosphere.

What will the next release be? And when can we expect it?
Within our saldorian stronghold echoes the sound of steel. Smoke ascends from the forges as fires burn day and night ! Slaughtercult gathers its’ armies once again. Currently we are adding final touches to the third all new chapter. “The Pest…” was the calm before the storm. “Follow…” showed our glorious presence upon the battlefield. “Nocturnal March” is the invisible force which manifests in order to break the very last human resistance !

All of your releases have been released on vinyl as well. How important are LPs for you?
CD, tape … vinyl nothing but different types of sound carriers. Not the sound carrier is important – what lies embedded upon it truly matters ! Some call a tape or vinyl more underground than CD releases. Those are exactly the same people who think rehearsal room recordings with absofuckinglutely pathetic sound quality are in the one and only true vein of early black metal ! Fuck that ! A lousy horde which spawns a huge pile of musical excrements will not overcome their shitty status … not by releasing a CD, tape or vinyl ! One can try to polish shit … it will only disgustingly smell more and more. Thus, vinyl holds the same importance as tapes and compact discs do.

The lyrics have not a real satanic approach, unlike many other bands, but more a dark and mystical intent. What is the reason for these topics?
Slaughtercult stands for own satanic, nihilistic, misantrophic believes. Our definitions of these terms probably collide with those predefined by the human majority. As we do not bow down before any man made god, may that be Zebaoth or the personified evil called Satan, our lyrics go beyond such broad subjects. There is by far more to it than having the word “Satan”, “Hell”, “Evil” or the likes in every sentence of the lyrics. That would just be too shallow and generic. Our thoughts are deeply rooted in soil imbued by occultism. Some scrolls of lyrical enlightenment certainly have a dark, mystical touch while others take a more brutal, bestial violence approach. As we take the entire Slaughtercult very fucking serious it feels natural to also interpret honest feelings and thought patterns into the lyrics. Be assured that this reflects every aspect of every single release. No comprise, no trend orientation … we shall not succumb !

Not that it is that important at all. But you have a female in your line-up. There are not many bands in your musical vein that have feature women. What do you think could be a reason for this?
As mentioned numerous times before: Slaughtercult does not reduce individuals to a mere gender. May that be male or female ! A vivid description to deepen this thought: upon the great vast battlefield it does not matter through which hand the judging blade swiftly strikes down. Death has many faces – not just male and female. We do not put any importance into the gender. Slaughtercult stands as a union, shoulder by shoulder, sword by sword and axe by axe. In general extreme individuals are rare – only those may join the Slaughtercult.

You have shared the stage with many well-known black metal bands in the past. What is the most remarkable show so far?
Taking a look back to our darkened past we are facing 2 years of more or less constant bloodstained live battles. There were some fellow comrade in arms with whom we gladly joined forces on several occasions. On the other hand travelling around to different countries also gives insight into the international underground. Partially there have been some very important insights, which will prevent us from sharing a stage with certain disappointing “bands” and/or individuals ever again. One of the most remarkable shows was probably on shitmas eve 2002 in Arnhem (NL). A great reaction by the audience ! They faced the double bladed axe literally crushing christianity !

Can you recommend us some bands that are (too) unknown to the most of our readers?
Very much recommended are Fluisterwoud (who are apparently unknown outside of the Netherlands), Goetia (Poland) as well as those hordes appearing on DNS split vinyl !

Since you contacted me via e-mail I guess you are following the scene quite a lot. How much are you involved? And does internet play a role in this? And what about (fan) zines, tape trading etc.
As DNS has an official web hell the internet does play a certain role. Just like the web can live without http://www.slaughtercult.de/, we could also live without the world wide web. It allows fast information exchange as well as easier communication/contact. All serious inquiries by e-mail and ofcorpse snail mail are answered. We do not follow the scene ! We do have our contacts with whom we stay in touch. These are bands, zines, labels, selected individuals which have been supporting us directly. On some occasions -like this one- contact is established through unforeseen events. Our interest in the majority of the underground scene has been drowned by a flood of too many below average “we are the truest black metal band ever” releases. Drowned by too many unworthy to mention albums. “Insignificant to me you are…” Thus trades are reduced to a minimum. If at all merely with individuals of our choice.

What is your top-5 of the past year?
Some of the latest stuff acquired which was ale to remain noteworthy: Urgehal, Fluisterwoud, Primigenium … ?!?!

These were my questions, thanks for the interview! The last words are classically yours!
Await the third coming … with pounding trembles in the earth, with solemn pace it draws near !