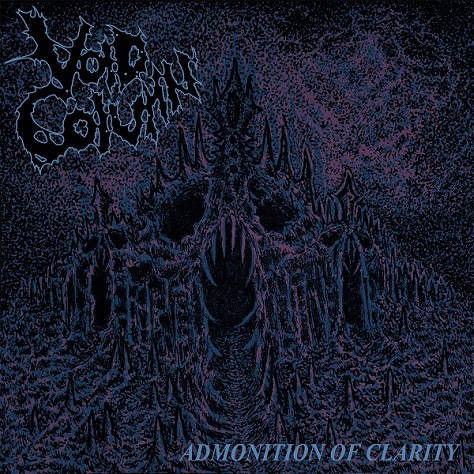 Early this year the anonymous Canadian entity of Void Column returned with another demo under the name of ‘Quiescence (Demo II)’, which was a logical continuation of the act’s first demo, which got a positive review on our pages as well. It only took Void Column a few months to come up with another EP/demo, which is this ‘Admonition Of Clarity’. Again a deliciously horrifying slab of down-tuned guttural Old School Death Metal.

Compared to its preceding recordings, ‘Admonition Of Clarity’ has nothing new to offer but shows a stoically and stubbornly perpetuation of the tried-and-tested formula of crunching, down tuned guitar riffs, bowel movingly deep vocals and bulldozing rhythms. It results in four head splitting tracks (and a two-minute dungeon-like intermezzo) in which Void Column is increasingly proving to be an act to be reckoned with. The few aspects that stand out compared to its predecessors is that the emphasis is slowly starting to lie more on the bilious, sinister and gloomy atmospheres. The use of some moody keyboards now really adds something special, and although Void Column certainly sounds less minimalist because of the full and obviously more devastating sound, here and there a slight comparison with Paradise Lost’s ‘Lost Paradise’ comes into play. The only note is that the drum sound sometimes sounds a bit too digital and too clinical, Void Column would do well to pay (even) more attention to this on a next recording. But, if you were charmed by the previous Void Column demos, you can blindly buy this one too; and for the enthusiast it also appears on CD. Now we only have to wait for the black gold, because a vinyl treatment would be a great idea for (all) these recordings. (FelixS)