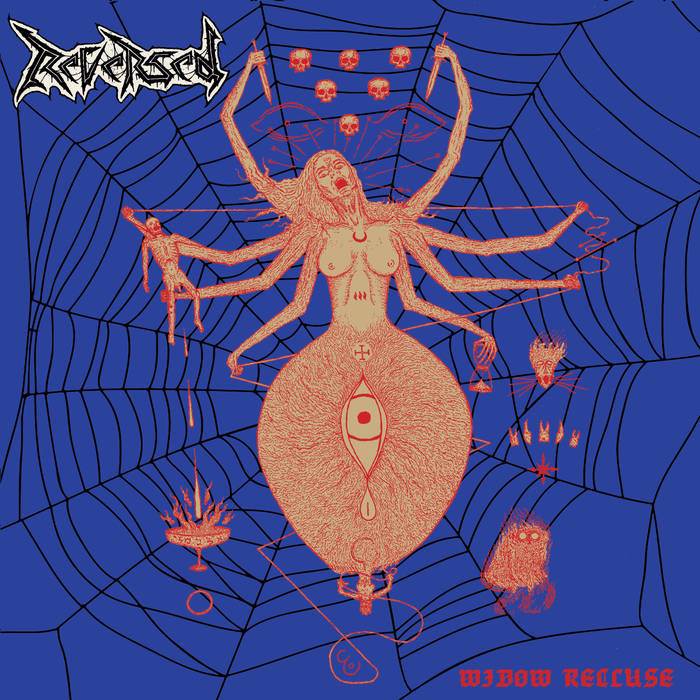 Bust out your spikes and bullet belts for this one, because Reversed bring the old school evil with their debut demo, Widow Recluse. Pulling inspiration from greats like Celtic Frost, Venom, and Possessed. Blending Black/Thrash/Speed and Death metal, these five tracks are sure to please even the toughest of critics.

Reversed hail from Vancouver, British Columbia, and consists of Reversed Perverser on guitar and vocals, Perversed Reverser on guitar and vocals, Wretched Intrancer on bass, and Morbid Seducer on drums. With names like that you know you are in for a treat, and Reversed do not disappoint. These songs are sadistic, grimey and perfect for prowling the cemetery at midnight in search of corpses to dig up. Nothing about this demo is pretty, I want that to be clear. This is music for die hards, made by die hards. As evil and sinister as this demo is, there are some serious chops being displayed here as well. The riffs are venomous and evil, the leads are catchy while staying grimey, the vocals are that of a possessed, tortured, wretched soul, and the songwriting is top notch. That is my biggest takeaway from this demo. These songs are incredibly well written, because there are plenty of bands doing this style nowadays, but Reversed seem to stand out from the pack, and I credit that to their songwriting skills. The production is top notch as well. It manages to sound old and grimey without taking anything away from the instruments and music itself. Everything is clear and easy to make out.

The best I can describe their sound would be a mixture of old, evil Black Speed and late 80s style of Death Metal. It’s like the demon spawn of Venom, “Morbid Tales”-era Celtic Frost and Possessed. The replay value is so high on this demo that it hasn’t left my tape deck since I got it, and will be in my top 5 in a year full of amazing demo/eps. Basically this is a damn near perfect release. I have zero complaints, and can not wait to hear more from these possessed madmen. This is true METAL OF DEATH. For die hards, sickos, fiends, grave desecrators and the elite. So go listen to this demo by these madmen known as Reversed. You will not regret it. Hails! (Putrid Lance)