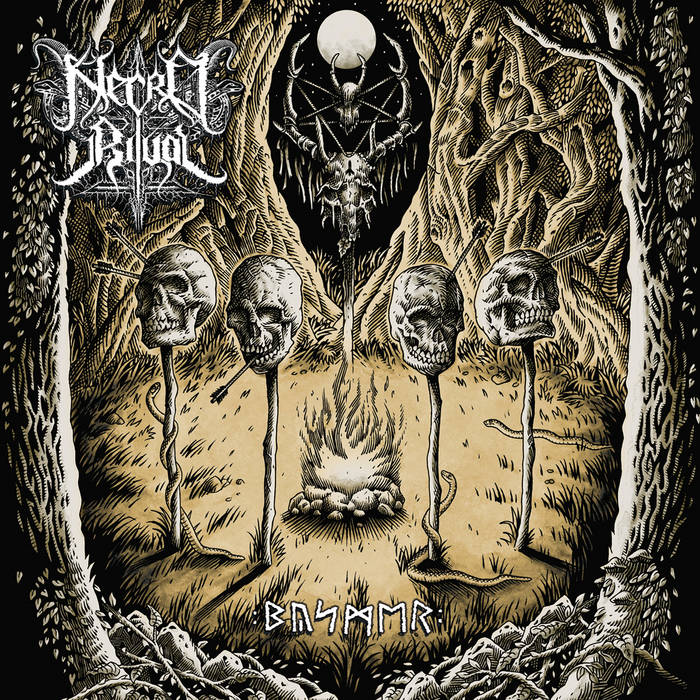 London Satanic Black Metal crew Necro Ritual have been active since 2003, but their new album Bysmer is their first output in over a decade. This new opus has been released on CD by Werewolf Promotion and comes adorned with very eye catching cover art. There is also a very impressive cassette release that comes in a limited edition and extremely collectable hand crafted box. Now despite the long tenure of Necro Ritual, and the fact that we are from the same country, I’m ashamed to say that this is my first time experiencing Necro Ritual. But holy shit what an impression they have made on me. ‘Bysmer’ would have been on my official albums of the year list had I not heard it after the list had been published. To call this album powerful is an understatement; its a furious slab of rabble rousing Black Metal that could convert Mormons to take up preaching the word of our lord and saviour Satan. Most notable are the vocal histrionics of Corseth who not only spits out bleak, growled spite at every opportunity, but also has a directness and charisma to his work that would make most Hardcore vocalists sit up and take notes.

It isn’t just the vocals that are noteworthy though. Every individual aspect of this band is written and performed to the highest of standards, and then meshes with each other with the greatest of ease and cohesion. Talos, the man behind the kit since 2019, has a grandiose, anticipation building way about him. Adept at brutalizing when required, his style is also about building up a colossal, mountainous wall of noise as well as delving into the climactic when the situation arises. Both Void and Skragmor on the guitars bounce off each other superbly, constantly in sync. Their display of furious grinding riffs combined with enthralling and often ritualistic guitar melodies are a thing of dark beauty. Void also excels on bass duties, churning out a rhythmic bowel opening rumble throughout.

Needless to say at this point but I rather like this album. I have have to see what payday brings with regards to those impressive looking cassette boxsets. I see there are a few still available.