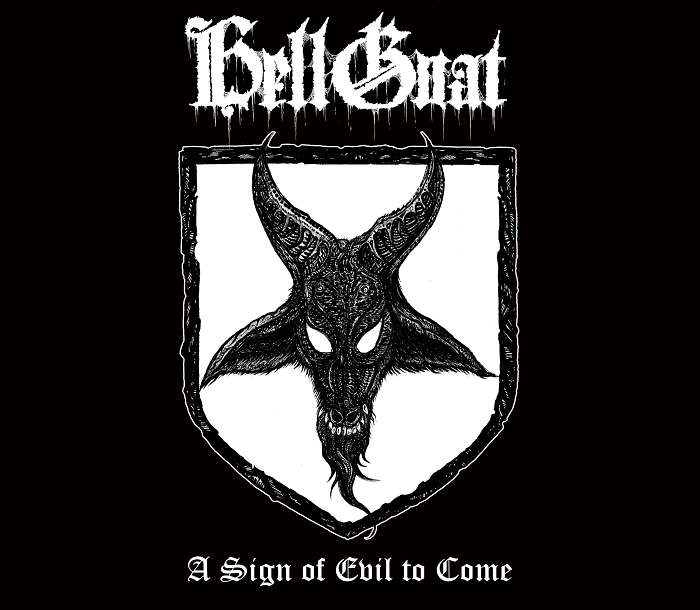 The last couple of years have been an inspired period in time for Swedish solo artist Skoll, especially when it comes to his Raw Black Metal project HellGoat. Following a spate of split releases with bands such as Glass Coffin, Isataii and Derelenismo Occulere, Skoll has pooled all of his creative juices and unleashed an old school blast of Darkthrone/Judas Iscariot worship for his debut album with HellGoat, entitled ‘A Sign of Evil to Come’, released on cassette via Black Bunker and Knekelput!

Starting with the crackle of an open fire and leading into some fast paced slightly lo-fi and traditional sounding guitar leads, mixed with raucous screams and shrieks and full throttle blast-beats, ‘A Sign of Evil to Come’ is literally everything you would expect it to be, from the ravenous riffs that feel like they’ve swept in from the frozen north, to the hostile punishing vocal style and the break neck unrelenting ferocity of the flat out drumming style.

‘A Sign of Evil to Come’ is a remorseless bludgeoning beast with a one track mind, to bash out uncompromising Darkthrone worship at furious speeds and with reckless abandon, and it hits the frost covered nail right on the head from moment one right to the very end! It can be neatly summed up by simply quoting to you the second tracks title… “Fuck Your Mercy… I Want Bloodshed”. (Marksson)