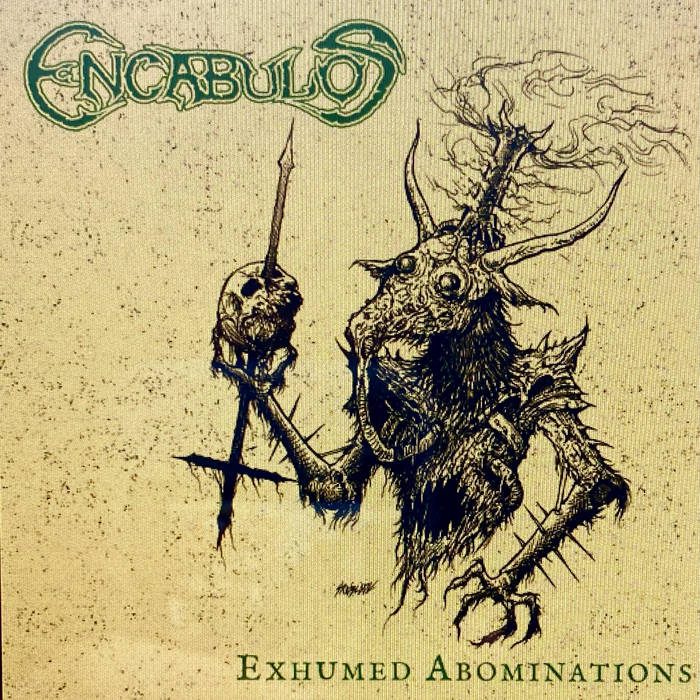 Under the fitting title of ‘Exhumed Abominations’ Nuclear Winter Records unearthed an almost forgotten piece of underground Death Metal history: Encabulos. They were a Death Metal band from Australia that released six demo tapes in the period between 1995 to 1998 after which they also released a mini CD under the title of ‘Abandoning The Flesh’, which was released in 2000 by the short lived Venomous Records label. Not all too long after, the band folded, leaving very little impact on the scene. But, Nuclear Winter Records thought otherwise and compiled some of their recordings on this CD.

The band had a sound that finds itself a bit on the tipping point between American and European Death Metal, bearing resemblances with bands like Deicide (mostly in that fast vocal style and its frantic drums), early Malevolent Creation and Bolt Thrower. Maybe not all that original, but at a time where Death Metal was declared dead for the most part or was taken into a more technical and brutal path, Encabulos served their Death Metal with a tasty sort of Old School flavour. And with todays ears, it still sounds remarkably fresh and energetic. Of course, the production is a little flabby here and there, but personally I think that only enhances that raw and primal vibe.

The compilation offers Encabulos’ work in a-chronological order, which means we start with their most recent work. Which is the ‘Immolate The Chosen’ song that was never before released. It that was supposed to be one of the two songs for a never materialised split 7” EP with Random Violence (another Australian Death Metal band that features later Encabulos vocalist George Saris), the other song that Encabulos recorded for this split 7” (‘Storming The Gates Of Purity’) is apparently not included on this compilation. The band confirmed both tracks were already recorded and ready for release, the reason why it never surfaced is a little unclear, they even said they would print the split EP themselves if necessary. The same question can be asked about the whereabouts of that second track on this compilation CD.

The next five tracks are taken from the rather rare ‘Abandoning The Flesh’ mini CD, which actually has a sound similar to ‘Immolate The Chosen’. Yet the vocals sound more muffled and maybe a little hollow too, which doesn’t bother at all and even adds to the overall ambience of the tracks. The mini CD’s closing tracks, a cover of Bolt Thrower’s classic ‘Cenotaph’, emphasises one of Encabulos’ main influences.

The subsequent tracks are taken from the only two demo tapes that the band regards as part of their official discography (discarding the first four tapes that they only spread amongst friends): ‘Dark Divinity’ from 1998 and their self-titled demo from 1997. Listening to them in reversed order you’ll be presented with the tracks going from raw to rawer and from primitive to even more basic, but with the very same musical signature as heard on the later tracks.

Although Encabulos were never able to get beyond their demo-stage and never really gotten the recognition they might deserve, I think it is only fair to give them a chance, just over twenty years later. Maybe things might have been different if that one split 7” EP was released, just like that split 7” EP with Hour Of Penance that was in the talks back in the day – who knows? Ah, well, you can’t change the past, but you can leave it up to Nuclear Winter Records to dig around, stirring up some graves and exhume some forgotten abominations.