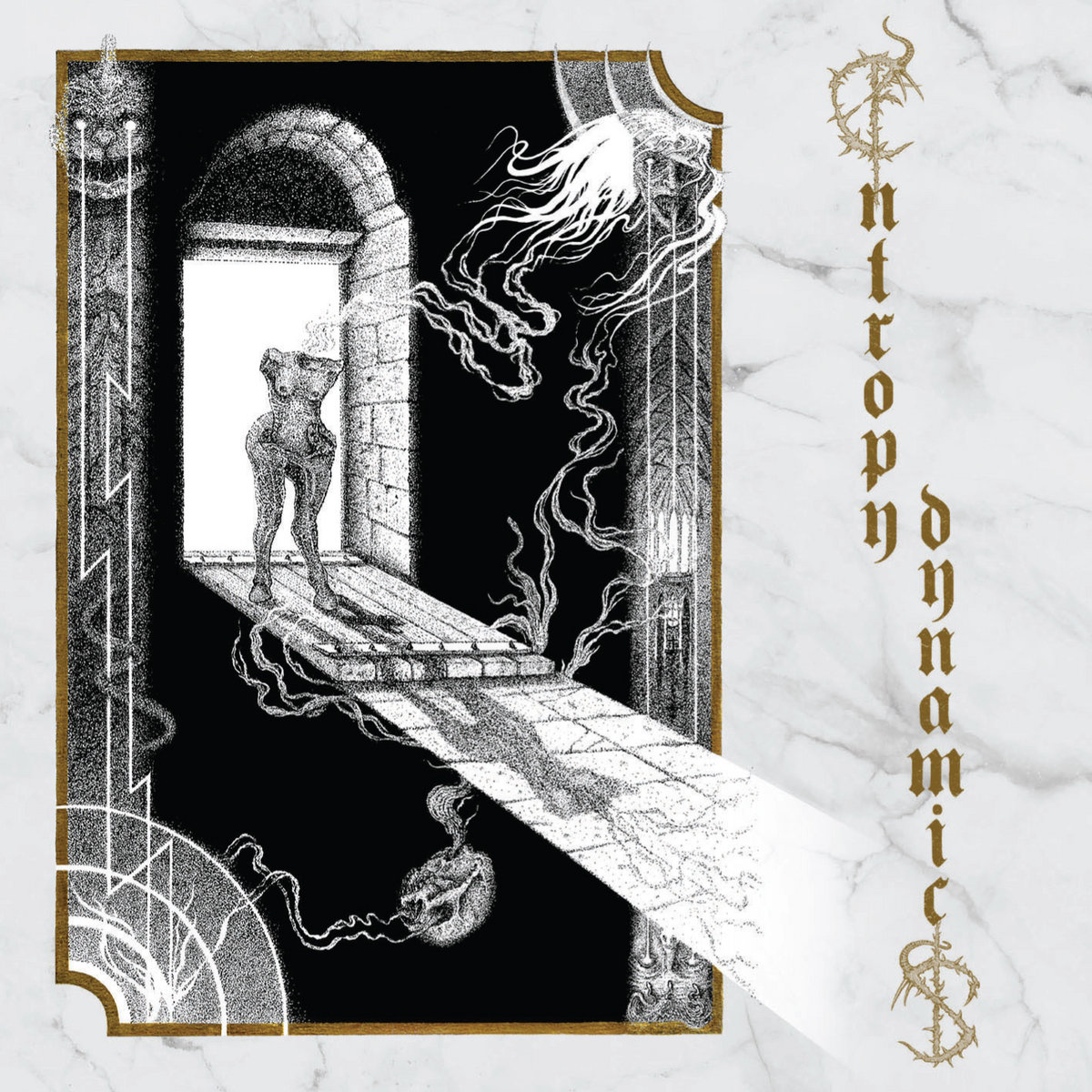 It was at the German Doom Shall Rise festival (of all places), sometime in the mid-00’s, that I first heard of Embrace Of Thorns. Walking past the merchandise stands, people were buzzing about a new Old School Death Metal band from Greece. That moment was and has remained exemplary for Embrace Of Thorns’ musical career. Loved by a select group of fans, but still not picked up by ‘the general public’. However, this Greek metal machine continues stoically, now delivering their sixth full-length album with ‘Entropy Dynamics’.

By the way, the term ‘Old School Death Metal’ band turned out to be not entirely happily chosen. Embrace Of Thorns started out once, in the late 90’s, as a Black Metal band and, over time, evolved into a band in which Death Metal played a bigger role. In my review for the ‘The Pantheon I’ 7″ EP from earlier this year (via Iron Bonehead Productions), I already stated that you could also take the view that Embrace Of Thorns is still a Black Metal band with Death Metal influences, or, if you will, the other way around.

That 7″ EP featured a song that was said to be an advance for the new album. That song, ‘Awakening Of The Elder Warlocks’, had a more chaotic feel, not entirely unlike what is commonly labelled as ‘War Metal’. So that 7″ EP, of which the first track was still from the sessions of the previous album, ‘Scorn Aesthetics’ (2018, Iron Bonehead Productions), would be something of an intermediate step towards a new phase for Embrace Of Thorns.

In fact, listening back to the ‘Scorn Aesthetics’-album and ‘The Pantheon I’-EP, I have to conclude that there is no sign of a rigorous and dramatic turnaround. In fact, I think ‘Entropy Dynamics’ is pretty much an extension and a logical continuation of its preceding full-length. At times, it even sounds a bit more Death Metal and is professionally filled with deadly riffs. However, it is very clear that Embrace Of Thorns continues to develop with each album and every time more pieces of the puzzle fall into place. In this light, a discussion on the extent of influences from any metal sub-genre is actually rather pointless. The band develops further and further into a multi-headed monster that grabs its listeners by the throat in an ever more efficient way and drags it with it into the all-devouring depths. The proud and robust riffs effortlessly hold their own in today’s metal scene where there is an ever-increasing and overwhelming competition for the (online) listener. Another important factor in this is the degree of dynamics, which becomes an increasingly important musical element with each new album. The alternation of furious Black Metal riffs, the brute force of Maelstrom’s Death Metal drums (of Thou Art Lord, Caedes Cruenta and Necrovorous fame, among others) and the vocal acrobatics of Archfiend DevilPig (also known from Necrovorous and Serpent Noir) make this nearly hour-long exercise in organised chaos feel like fifteen minutes. In this, the samples and interludes are also of great value, it gives you a moment to process everything you have just heard before being swept back into the frenzy in full force.

With this knowledge, the meaning of this album’s title also falls right into place. Entropy is actually the degree of disorder. Seen from a scientific perspective, universal chaos always tends to increase in size. This is also what we observe in Embrace Of Thorns’ development as a band. With each new record the increasingly chaotic and multicoloured music results in a growing impressive musical identity.

Still, looking back and summarising, I don’t think Embrace Of Thorns is now very specifically bringing something totally new or taking a completely different musical turn here. The somewhat more chaotic slant of the B-side of the ‘The Pantheon I’ 7″ EP is not necessarily followed up to an extreme degree on this new album, but the lethal blending of all extreme metal genres does take on ever larger and more impressive forms. But incidentally, what has also become clear once again is that the buzz I picked up in Germany, some good 15 years ago, was definitely in place and the people there had a prophetic view of the band. However, Embrace Of Thorns has developed to such an extent that it by no means can be labelled as ‘just’ an Old School Death Metal band (anymore).