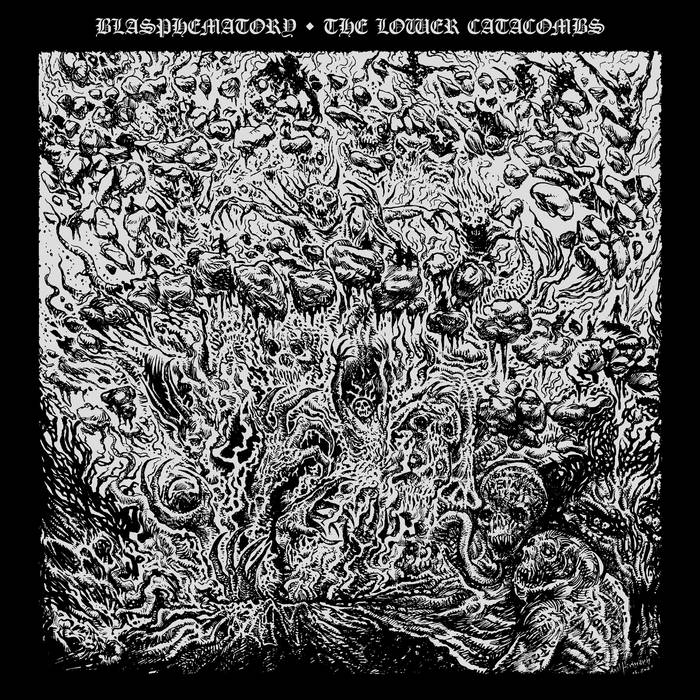 As if a night in the catacombs wouldn’t be hellish enough, experienced New Jersey Death Metal trio Blasphematory invite you to go further with their sophomoric full length album ‘The Lower Catacombs’; a release that has seen the dark of night on both cassette and LP through labels Nihil Verum Nisi Mors and Nuclear Winter Records. I mentioned that Blasphematory are an experienced triumvirate of carnage, and I wasn’t lying. Joe Aversario, (Bass/Guitar/Vocals) drummer Chris Warhead and Tom Deceiver (Rhythm Guitar) are all active together in bands such as Black Metal miscreants Abazagorath and Altar of Gore, whilst Joe and Tom work together in myriad other Black/Death projects such as Apex Winter, Jaws of Hades, Death Fortress, and Morbid Destroyer, as well as a Death/Doom act entitled Senobyte. So you know that Extreme Metal courses through all three of these guys veins!

Blasphematory certainly set the tone for this album pretty well, with murky production, a grim sounding muffled sound to the drums and a menacingly brooding tone to the riffs. Rather than an all out festival of break neck speed and flailing guitar leads, Blasphematory focus on slightly more low-key, creeping Death Metal with a punishing spine of powerful bass play and drumming, whilst the vocal work growls with menace and ill intent from deep within the mix. Of course the flavour of the album comes from haunting guitar rhythms, but the unsettling vibe comes from a combination of bass and guitar leads that compete with each other within the mix for supremacy.

All in all, ‘The Lower Catacombs’ has an understated, cautious feel to it, and that is why the album name fits so well. This album sounds like it has been hidden away for a vast amount of time in some dark and gloomy labyrinth; festering and contemplating its own evil. So whilst ‘The Lower Catacombs’ isn’t a spectacular album to behold, and whilst the musicianship isn’t overly tight throughout, its subtle predatory atmosphere is highly impressive and has way more charisma than a lot of modern day Death Metal bands can create.