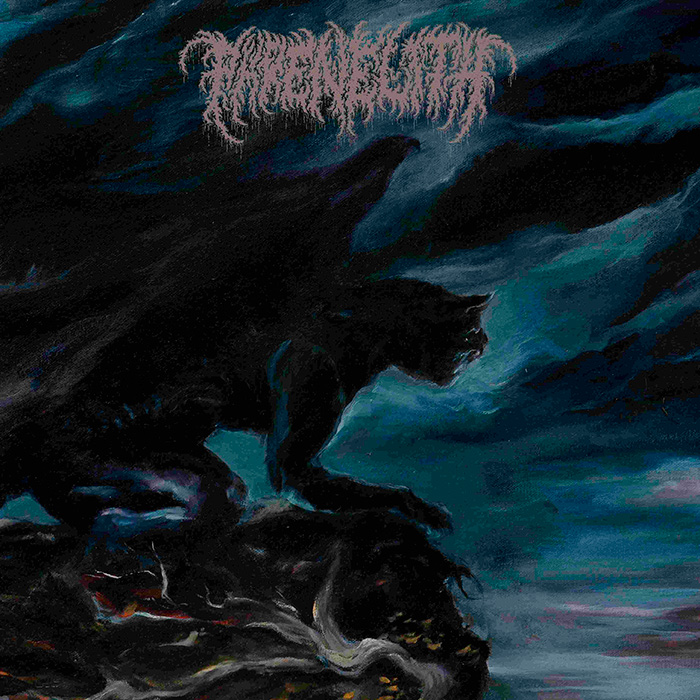 Solely intrigued by the cover art for Phrenelith’s second full length “Chimaera”, done by the late beautiful soul Timo Ketola (RIP). While certain band member’s not too fond of, going to keep personal opinions set aside. Besides, my following isn’t up to par to be acknowledged by them so it doesn’t really matter how this flows.

Getting into it, the album’s name refers to a female Greek mythological beast who’s made up of a lion’s head, goat’s body, & serpent’s tail, again with Ketola’s imagery giving perfect depiction of this varmint.

When compared to previous 2017 LP “Desolate Endscape”, there’s similarities of featuring an instrumental, a bit more condensed in time span this round, and verily wallows into a resonating commodious framework.

Notable on “Phlegethon”, representing each drawn out note malleable from crushing to remedying throughout, even to those perilous warbling noises toward the outro. Caustic “Gorgonhead”, which ties into their nefarious Greek mythicism describing creature with snake hair (Medusa), I’d consider to be a highlight chiefly for rhythmic section, abrasive riffs flowing eloquently with the not too overdone drum work and dense bass lines giving an impenetrable tone that’s flagellating and groovy yet sadistic.

Dynamic opening “Awakening Titans”, highlight being the versatile percussion work that ranges from fluent to discordant measures, impetuous perception to consume you into its hellish gyre. Let’s also recognize Greg Wilkinson of Earhammer Studio & how he finely crafted the production to give a refined yet organically cavernous undertones to this product. “Χίμαιρα”, Greek word for the album title track, a momentary euphony as opposed to full cliche full song.

“Chimaerian Offspring 1 & 2” take up ⅓ of the album, pt II being the better half IMO, though it’s the longest, still has an impact that’s granulating to the senses, reminiscent of all the death-doom greats bunched into one exceptionally constructed tune, as well as a band who’s easily progressed and this album lives up to the hype! (Tori Belle)