Chained to the Dead – A Gruesome Encounter 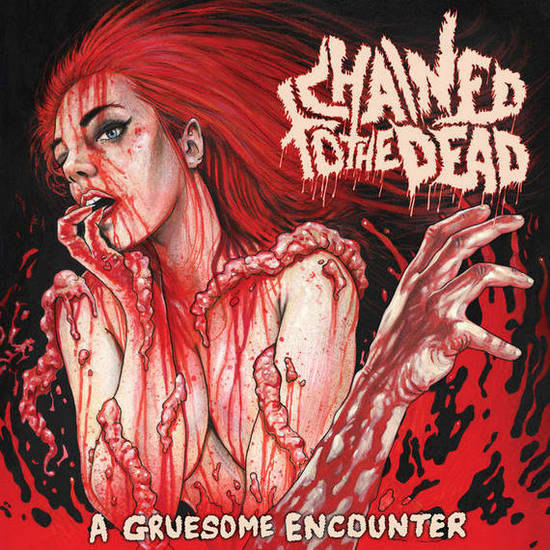 Horror and Metal will always go together, and for those who don’t like horror movies, shouldn’t be trusted. Chained To The Dead reflects their music solely off horror samples and discussion of serial killers while blending  Death Metal warped with groove, producing a distinct sound. Their debut LP “A Gruesome Encounter” has more of an upbeat tempo compared to what’s usually down tuned and was also expecting tone to be more deep guttural, but pleasantly surprised of how Rocco Martone aggressively churns a raspy cadence in his vocals.

Artwork was done by Len Danovich, showing a girl covered in blood spatter and intestines and a decomposing arm rising up as if she’s turned on, while keeping  a simple palette of red, fleshy hues with a solid background.

Released towards the end of 2019, this is their first full length after being around for the last (now) six years. These guys have influences of death metal with some grind that doesn’t sound “cloned” since they transform it into their own and the production is not overly refined, they contain a bit of encrusted filth to give us something more original. You can equally feel every member’s presence on this album, from Joseph Ott’s drumming with proficiency ranging from blast beats to breakdowns, especially on the track “The Shunting” (with beginning sample from Society), it’s a great buildup to a heavy hitting finish (prominent by 3:15 mark.) Stephen Rasczyk’s immaculate guitar riffs that compliment Ott’s drumming, such as “What Lies Beneath The Gate” where at moments sounds cacophonous but for some weird reason, works or on track “You’re No Saint” when he includes a psychedelic, haunting  solo at 3:04-3:40. And let’s not forget John-Paul Dal Pan’s bass slithering in at the right time, whether it’s an opener like on “A Grave With No Corpses” or a quick sexy solo at 2:35 on “Slaughtered In Their Sleeping Bags” to suit the mood for this album.

Do yourself a favor and take a listen. These guys are great at their craft and this was a fun one to jam. (Tori Belle)