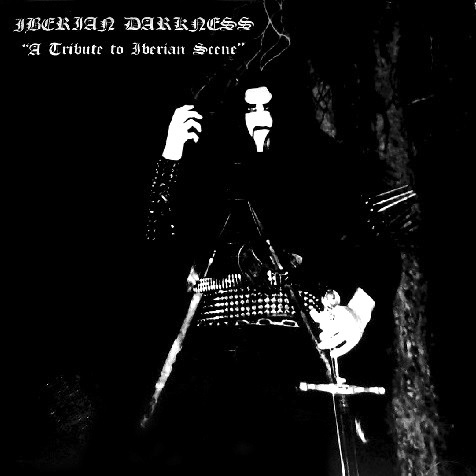 “In Darkness There Can Be No Light”

“Iberian Darkness…” is a prestigious project from A Fine Day To Die Records Spain, that tries to shed a light (awful pun) on the Spanish underground Black Metal scene from the last 2 decades. Bands and projects that were or still are active, spreading their demonic influences and perversions in the undercurrent…Five bands are featured on this beautiful designed compilation CD.

Argar are the first with 5 tracks from their “La puerta de la soledad eternal” demo (1996). Majestic, fast-paced and keyboard-driven raw vampiric Black Metal is displayed on these 5 tracks. The creepy crackling vocals, who seem to be reciting blasphemies in a very convincing way, add an extra raw and extreme dimension to the songs. One would say the Spanish Cradle Of Filth? Forget about it – these songs are way more extreme than CoF ever managed to produce. For a 1996 demo, these tracks sound refreshingly crisp, solid, coherent and up to date, by the way. Impressive.

Blazemth are the second band. Not entirely unknown as the band has released a couple of EP’s in the past. These 5 tracks are from their “Seven Winds Encircle My Soul” demo, which was released in 1994. A razor-sharp wall of abrasive guitars and insane vocals, firmly backed up by a heavy and very solid rhythm section cloaks the surroundings in total darkness. Again, quite surprising for a 1994 demo recording. This material is also far more extreme than the releases that followed.

Next up are Gothician with their demo “Northern Storm (…From the Celtic Hispanic Nordlands)” recording from 1995. Unbelievably raw and hateful pagan Black Metal with coarse inhuman vocals, the necessary murky keyboard bursts and also bearing a tremendous heavy cavernous drum sound. Authentic Black Metal frenzy from a lost era.

Uruk-Hai is represented with their 3-track EP called “In the Side of Eternal Eclipse” (2001). One of the better known bands, having released 2 albums on Deathrune Records in the past and known for their exxxtreme musical antics. This EP has also been added to the “Iberia Nocturna” Uruk-Hai compilation, but A Fine Day To Die Records were first. I barely managed to find shelter before this sonic explosion started. Nerve shattering, tortured shrieking vocals (Spanish Inquisition?), epic and chamber wide guitars and what seems to be an earthquake instead of drums (those bass drums ouch!!) steamroll their way into the dark. Pure madness!

Last of these Iberian devil worshippers are Trasgo ( the spanish word for ‘Troll’). Tracks taken from their 2005 demo recording “The Secret Eyes of Nature”. Outstanding production, corrosive and irresistible in diabolical nature. It simply engulfs you. Pure second wave BM, done the Iberian way.

“Iberian Darkness…” is not only a beautifully designed compilation. It also features the necessary information and liner notes, as well as unique pictures from all bands. I didn’t want to spoil the surprise, so I left out additional info and focused on the music. My version seems to contain 3 spooky bonus tracks of swirling medieval Black Metal with a tormented vocalist. What the fuck?!? And before I forget. The output levels on this CD are loud. And I don’t mean loud, but LOUD !! Are you people deaf over there in Spain?

An essential purchase as well as a precious documentation of the Spanish BM underground. There are more bands, so hopefully an equally impressive volume 2 is to follow. Who knows? (LV)