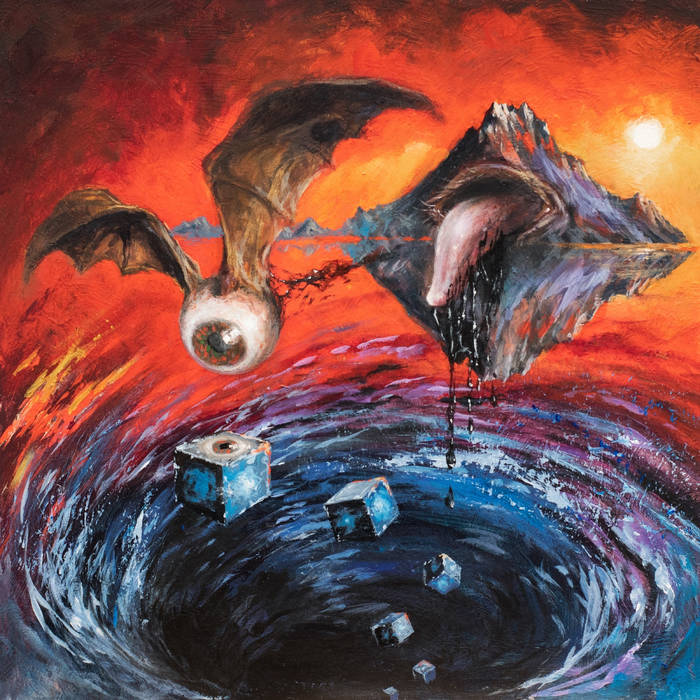 Lupus Lounge is presenting a very interesting split LP (also released on CD and on cassette tape by Vigor Deconstruct) by two illusive and enigmatic acts, Tchornobog from the USA and Abyssal from the UK. This split LP marks the return of Tchornobog, which caused quite a stir in the extreme metal scene with its much revered self-titled debut album in 2017 and Abyssal offers their return after their 2019 ‘A Beacon In The Husk’-album, which was generally a little less well received than the preceding two albums. On this collaboration, both bands really pushed their boundaries to imitable heights, offering one track each, both nearing the 25 minute mark.

On its debut album Tchornobog hit the scene with an album in which he wrote the ultimate soundtrack to the Armageddon-like horrors that was depicted on the amazingly great cover art. Blending Black Metal and Death Metal into otherworldly horrifying depths, using so much detail and dynamics, it was impossible to wrap your head around it after a few spins. And with only four tracks spanning well over an hour, Tchornobog is no stranger to lengthy tracks. So, a project like, offering one long track that keeps you on the edge of your seats, suits the band like no other.

Most striking difference between this new track, ‘The Vomiting Choir’ and anything on the debut album is the big step in the sense of recording quality. The debut album had quite a raw edge to it, which made it even harder to grasp, that slight rawness seems mostly away. Don’t expect a crystal clear and well-polished sound though, it still retains a bit of that gritty sound, but the much bigger sound enhances the overall experience. The musical ingenuity has also been pushed around to various different angles, giving the listener quite a lot to chew on. Going from more straight forward passages (maybe catchy, even) to downright mathematical complexity. Yet, its grand epic is untouched and even further expanded, through many of its chasmic inimitabilities and otherwise cosmic oddities. Tchornobog definitely offers yet another monumental track of creative darkness and delirious beauty.

Abyssal on the flipside has a longer history of releasing albums, but apart from a single song of around 10 minutes, much less with writing long songs. So I imagine it was more challenging for Abyssal to fill an entire side of an LP with a single song. But the band’s at times slow Doom/Death Metal does lend itself well to such a project.

The Brits’ song gets off to a somewhat slow start, but around the 4-minute mark, it loosens up and we get the first Death Metal acceleration. The interplay between fast blast-driven pieces and the some passages much more reminiscent of (Funeral) Doom alternate in a kind of wave motion. Although musically this is all well put together, especially the somewhat flatter sound compared to Tchornobog is something Abyssal lags a bit behind on and thus makes much less of an impression. The band does provide a nice palette of sound colours, also a bit more guitar leads and some droning soundscapes than the fellow on the A-side of this split LP, but in the end it all comes across a bit less well and the band only struggles to hold the attention for the full length of the song.

That this split is primarily Tchornobog’s party after all is evident from the once again dazzling artwork. The cover adorned with almost Clive Barkerian fever-driven nightmares fits well with the cover of Tchornobog’s debut album. However, it wouldn’t do justice to Abyssal to dismiss their track as ‘just’ a B-side, for that the songs fit together too much in terms of feeling, theme and atmosphere. Long story short: an extremely successful collaboration.