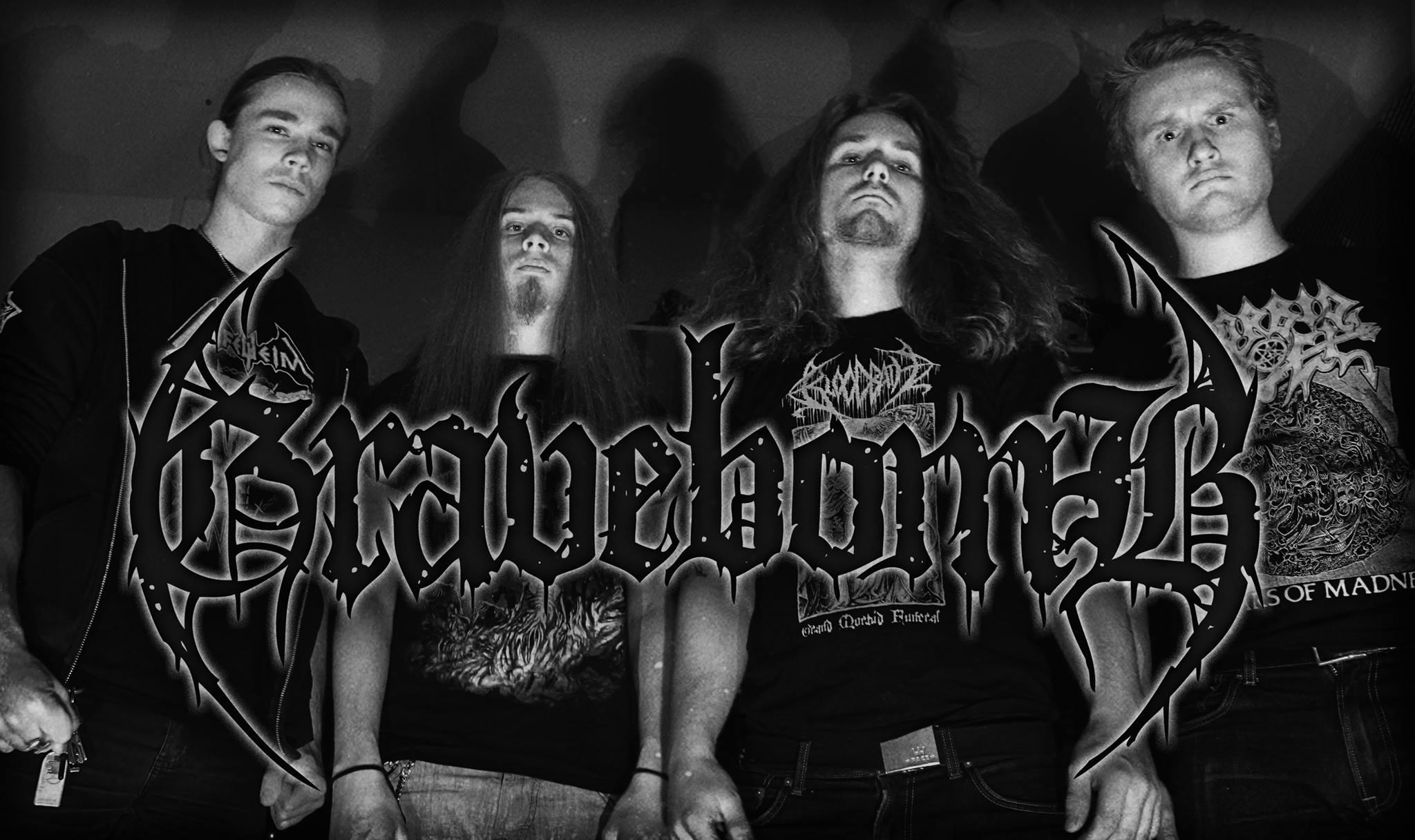 Svensk Dödsmetall quartet Gravebomb released a full length on their own this year and started an online campaign to get their name heard. It seemed it a bit difficult to find the right partner, but with upcoming Dutch Old School Death Metal label Raw Skull Rekordz they have the right support to spread their chainsaw madness. In HM-2 they trust! (Ricardo)

How it all started…
We formed in the summer of 2014 in Gothenburg. It started out with Patrik leaving his former band to play death metal of the old school kind and without any likeminded friends signing up for it he turned to the internet and found Petter. Patrik also knew of Leon from Sonic Assault (a local thrash metal band) and the three decided to meet up and see what could be arranged. Said and done, and with Sven (Petters younger brother) joining shortly there after as a bass player we were quickly a complete band.
We take most of our inspiration from oldschool swedish death metal bands such as Dismember and Entombed as you mentioned. Apart from those obvious ones we feel inspired by other bands such as The Crown, Morbid Angel, Repugnant, Bloodbath, Autopsy and so on. After about a year of playing together and writing material we hit the studio to record Rot In Putrid Filth which we did in Trollhättan at Fvck Life Studios with Fred Forsberg. It got mastered where all the original masterpieces got crafted, in Sunlight Studio by Tomas Skogsberg! For lyric and themes anything goes really, but so far we have taken inspirations from movies like Alien, games like Amnesia and writers like Nietzsche. But for example Prime Directive is like an evil take on the Star Trek universe, and Animal Hunger is just a werewolf euphemism for fucking, really.

And your thoughts on Old School Swedish Death Metal?
Like any genre it is perhaps more about an attitude towards the artform that defines OSSDM, rather than only how it sounds. We use some blastbeats and d-beat that isn’t all that common in the older swedeath bands, but we still think we qualify in the genre. But of course, if we started to add metalcore breakdowns and pig squeels we would be crossing the line into poser territory. THAT’S A NO GO! 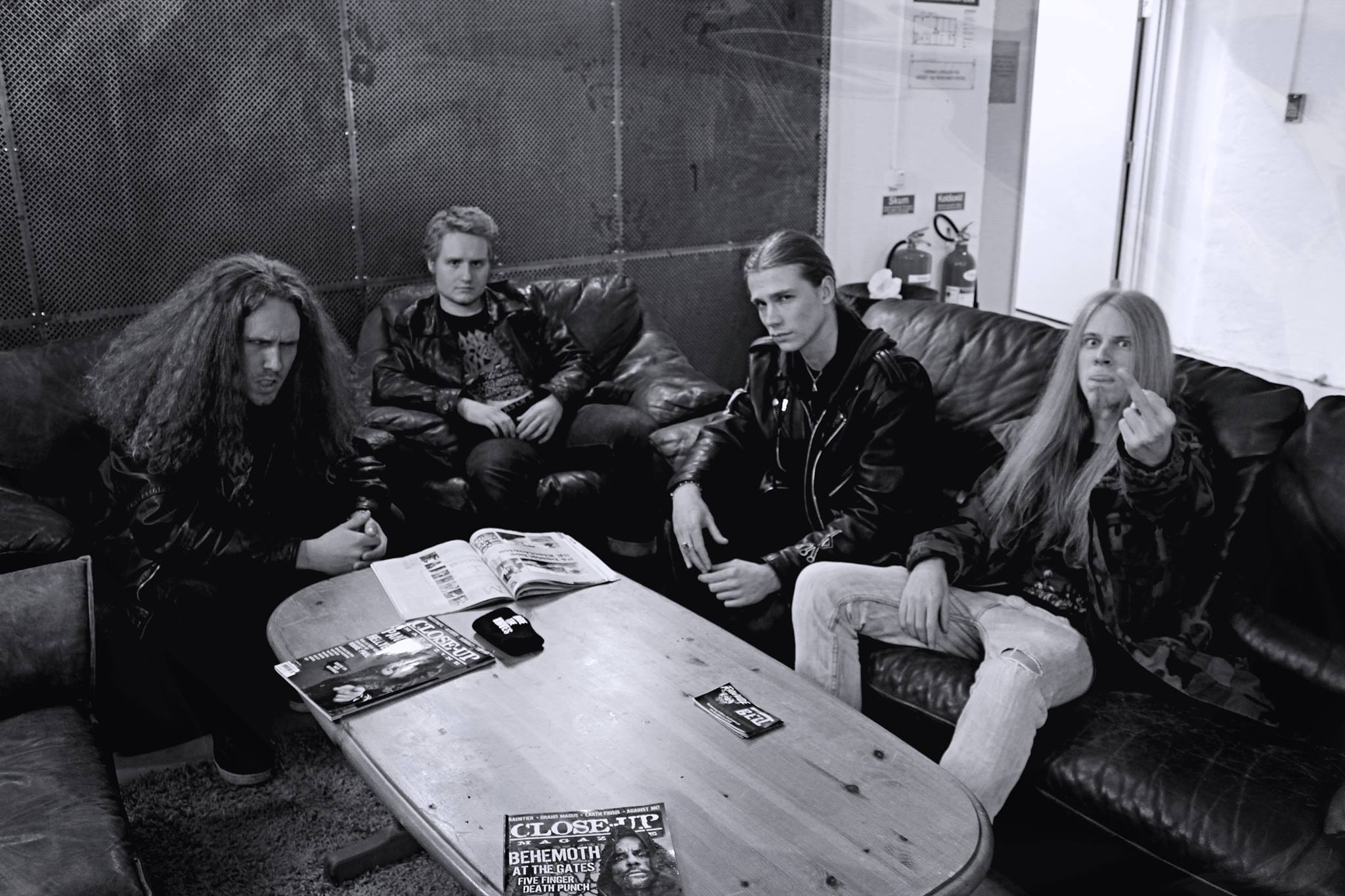 Let’s talk about your debut album, “Rot in Putrid Filth”…
We hope the listener will be assaulted by some really brutal riffs, massive drumming and evil vocals. But also some catchy songwriting and cool melodies that will hopefully mean the listener will remember the songs. We had the misfortune of signing a deal with a label that didn’t really do anything, so we were stuck for a while and couldn’t get the album out. But we released the album digitally, because we were so impatient. But now the album is finally coming out on CD, LP and tape in October, and we are very excited about that! At the end of October the album will be released on CD and tape, and hopefully LP as well. You can get them either through us or our labels: Raw Skull Recordz, Sound of Records and Metal Defiance. Shirts and merch will also be available soon enough. Easiest way to buy from us or just talk to us is through our Facebook page or mail us at gravebombdeathmetal@gmail.com. The feedback so far have exceeded all our expectations, it has been super positive and we feel like we really accomplished what we set out to do with this album. People seem to get it.

Let’s get back to the label thing, in a post on social media, you weren’t really happy with that part of the music business, right?
Well that was mostly me ranting about the old label we signed with really. It seems like a lot of our friends have had the same issues, signing with a label that suddenly drops all contact and any sign of progress and you sit there stuck with a contract saying only they can release your album. We were lucky enough to find a way out and I’m glad we can leave that whole mess behind and finally let Rot in Putrid Filth see a physical release!

Future plans?
We of course would like to play as many shows as we can, that is the most fun you can have as a band. We are already working on our next album actually, and have been talking about an EP/Split as well. It will all become clear in not too long!

Thanks for introducing Gravebomb!
Thank you so much for the interview! Cheers from Gothenburg, Sweden. In HM-2 we trust!