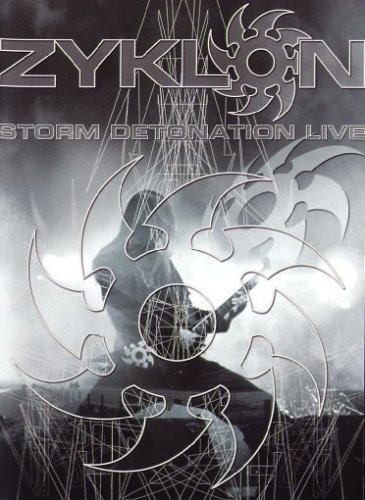 I guess Zyklon should be known by now so no need to repeat the band’s history again. After releasing two full-length albums and a third which will be out any time soon they now give the fans the opportunity to bring home the Zyklon live atmospheres by releasing a DVD featuring a well played performance at the 2004 Party San festival in Germany. This performance lasts for nine tracks of which four are taken from the band’s debut album “World ov worms” and five are taken from the second full-length “Aeon”. The sound during the whole performance is good and also the visuals are enjoyable with occasional close-ups and far-distance views. The band seems to enjoy playing in front of the enthusiastic audience and this shines through on this recording.

Because of this performance only this DVD is already a must for fans of the band but that’s not all. Besides this live gig also two videos are featured of which especially “Psyklon aeon” stands out because of the well worked out combination of both live footage and footage shot somewhere in the Norwegian wilderness. On top also a Death cover (“Pull the plug”) as an audiotrack can be found on this DVD and this is perhaps the most tight version I’ve ever heard from this classic Death song.

Furthermore a ‘Backstage & on the road’ movie is included and those parts are always the most enjoyable if you’d ask me. Such movies show your favourite bands from another perspective and also with Zyklon there is a lot of laughter during this short roadmovie. Very cool! Besides all this also a short rehearsal movie is included showing some fragments recorded in the band’s rehearsal room when playing some songs from the upcoming album “Disintegrate”. As always also a photogallery is included.

Unfortunately I can’t tell the total duration of the DVD because the promos which Candlelight is producing nowadays can’t be played in every CD/DVD-player (if they can be played at all). My promotional version of this DVD is constantly showing breaks during the performance leaving you staring at a freezed frame. Furthermore this promotional version can not be watched in one single take because after a certain time the disc just stops. So my apologies to the readers for not including this information and to Candlelight I would say: try to solve this problem please. After all we, the reviewers, have to portray a clear picture from what to expect from a release and with failing (or refusing) discs it becomes quite difficult. (MarcelB)