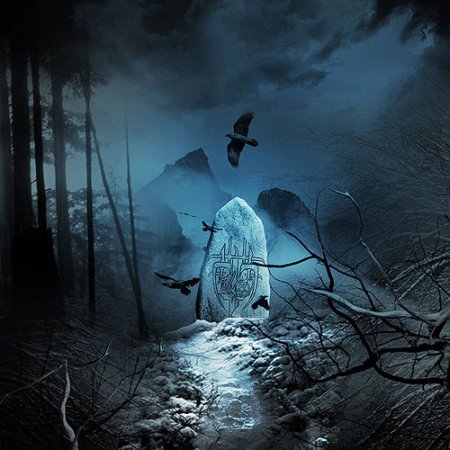 Forest Silence is one of the many new acts in black metal, but unlike so many of them I wish to warn you all to remember this name. After several demos it is finally time for a debut, a debut which can be called a success.

The title “Philosophy of Winter” can be explained as Winter’s philosophy how black metal should be made, and it is a sound philosophy. Winter: some of you might know him as former keyboard player of Hungarian well known and loved act Sear Bliss (our chief Ricardo reckons their debut “Phantoms” in his all-time personal top ten), and the link with Sear Bliss goes further. On this album he is assisted by current members of his former outfit, yet Forest Silence is quite different from Sear Bliss: you won’t find musical horns on this one. Figuratively spoken, I would say this album has horns all over! And unlike Sear Bliss, Forest Silence never really puts the pedal to the metal.

Forest Silence plays a kind of doomy, dark black metal that is somewhere between Ajattara and Burzum, yet not nearly as nihilistic as the latter one. And unlike the band’s name, do not expect anything such ambient as say Vinterriket. Forest Silence never chooses to go into high speed, in stead its music drags you down under in a sea of darkness like a moloch. The bio speaks of a slow and hypnotic journey, and I can only agree 666% with that statement. Funny thing is that the break in the title track, and the atmosphere (and also in ‘Spirits Of The Winds), remind me somewhat of Satyricon’s song ‘Black Lava’. Funny, as I would not compare Forest Silence with the kings of the shadowthrone.
When knowing Winter’s background, it is not strange that the keyboards play an important role on this “Philosophy of Winter”, but they do not over-dominate: the balance of all instruments is very good, thus giving the music the maximum impact.

Winter has not overdone the album with too many electronic frills in his music. Opener ‘Bringer of Storm’ has one of the strongest opening riffs I have heard in a while. Yet if you like quality black metal, with a very decent, massive sound, I can warmly advise you all to buy this “Philosophy of Winter”. Certainly not a Sear Bliss clone, but very much an asset to the black metal scene in general, and the Magyar metal scene in particular. The album is highly impressive, let alone for a debut. A mighty Hail is what this album deserves! (Neithan)