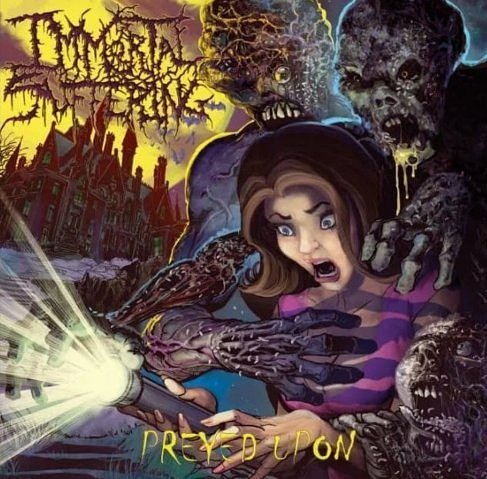 “Preyed Upon” is the second LP by Immortal Suffering following 2015’s “Asylum.” Formed since ’92, these guys from Queens, NY surprisingly don’t have much for their discography, aside from the two mentioned LP’s, 2 demos, 2 splits, and a compilation album. Started out with 4 members, including two current members Joe Provvisiero (guitar) and Ray Lebron ( vocals, (early bass)), and increased to a sextet by ’97 when they released a split album with Insatanity.

Disbanding by 98 and regrouping in 2013, “Preyed Upon” showcases traditional Death Metal, with some brutal/slam components as well. Having additional vocalist Ralph Spadafora and guitarist Leo Bakman gives a more dominant sound, along with newer drummer Randall Reekstin to round out their sound together. Compared to “Asylum”, I think they’re production came out lower, which actually sounds better to give off a toned down extremity to it, but still brutal as fuck. This LP features 11 tracks, including an instrumental and a cover track to clock in at a smidge over 36 minutes. Has plenty of quality pinch harmonic solos to slowing down, then up the tempo with blast beats and some groove riffs here and there with appropriate breakdowns throughout.  I think having the two vocalist and duo guitarist gives a unique take on old school brutal metal, really don’t come across too often since we’re so used to the typical one member for each role, makes you wonder how packed their jam space is or their set up for gigs to share all that badassery live on stage.

A couple of tracks that I favored from this album are “Embalmed Alive”, which features a sample from indie movie “Kissed” at the 3:39-4:33(ending). I also enjoyed “Remember Me” with a dope guitar riff at the 0:33, to be joined at 0:41 with John Dotzler’s bass notes, and Reekstin’s drums kicking in at the right time to tie it altogether. In “Corpse (2019)”, thought it was necessary to throw in classic cult movie “The Return of The Living Dead” sample when mentioning “I can feel myself rot,” shit I felt that…

And lastly, for them to close out with a cover “Cheap Vodka” by Acid Bath, really thought it was a nice touch and a great creative take from a classic jam that hardly gets fucked with these days. Acid Bath is fucking dope and to pay homage by featuring them I have much respect to that. Hopefully these guys can keep up the momentum to put out more material, only time will tell. (Tori Belle)