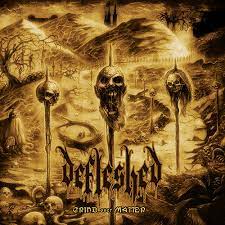 Not too long ago I spent quite a few words on Defleshed’s 7” EP, ‘Fleshless And Wild’, which was released to reintroduce us to the recently resurrected Defleshed. Arguably Sweden’s most constant purveyor of Death/Thrash Metal, at least, in terms of stable quality. Where other bands in the same vein have either failed to uphold the quality of their earlier and best records (The Crown) or pursued a more modern sound (The Haunted) Defleshed always stayed true to their game and released a discography of considerable quality.

Admitted, Defleshed were disbanded for just over fifteen years, but still. Diving into their back catalogue, it is evidently clear that the band has been quite stationary – in a good way. Their brand of non-flashy Thrash Metal with a deathly touch to the guitar tone is little original or unique, but has always been executed with professional precision. Of course some albums tend to be a little better than others, but the whole conceptual idea of Defleshed has remained intact over the full span of their career. This year marks their return with this first full-length since 2005’s ‘Reclaim The Beat’ (Regain Records) and proves the more that the Defleshed recipe is still working fine. I’m not exactly an expert on Swedish cuisine, but what Defleshed is serving is not quite a chef’s secret, so to speak. It is still fairly simple, yet pretty tasty. The are chopping their riffs onto an uptempo, staccato-like drum rhythm, with some blast beats added for good measure. On top they sprinkle the always aggressive vocals of Gustaf Jorde which together make for a devastatingly headbanger with only marginally room for a breather.

Incidentally, the band is often marketed as a mix between Death Metal, Thrash Metal and Grindcore. Metal Blade Records is once again taking this position. I’ve always found that a bit of an odd way to look at the band. It’s rarely happened to me that I found a Grindcore fly in my Swedish Defleshed soup. This isn’t exactly Napalm Death, Carcass or Terrorizer, nor is it Squash Bowels, Regurgitate, Dead Infection or Cripple Bastards. A band that incorporates blast beats into their music here and there is not necessarily a Grindcore band. Anyway, maybe that’s a matter of personal perception and frame of reference. Whatever you want to call it, musically Defleshed once again nailed it.

Needless to say or conclude, to those who were curious how the band sounded after fifteen years of silence or even thought they might have changed their musical course, I can say: Defleshed is still the very same band that they always were. Not only is that the main point of this review, but I think it is also fair to point out that staying on your own musical course is an achievement in itself and that it is given to very few bands to return to the same level after such a long break.