Catacomb – Back To Unknown Kadath [EP] 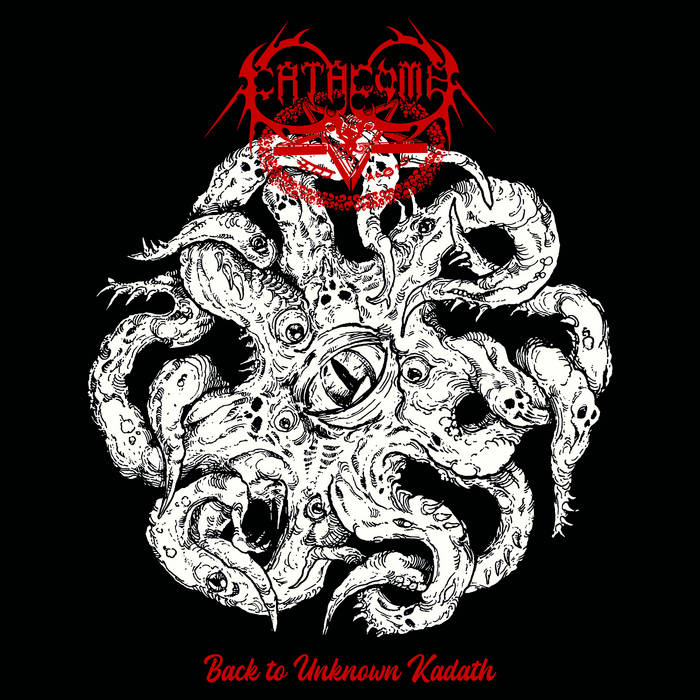 One of my favourite early 90’s 7” EP’s is ‘In The Maze Of Kadath’ of the French Death Metal band Catacomb. Their doom-laden, almost hallucinating kind of Death Metal just seemed to perfectly fit to its conceptual and lyrical theme. Catacomb seamlessly molded the illusive world of H.P. Lovecraft into Death Metal, not only the title and the lyrics were beneficiary to its cause, but the great cthulhian cover art completely finished the deal.

That piece of great music from 1993 was not only the best work by the French band up till then, it also seemed to have sealed the coffin for the band as Catacomb folded only a few months after its release. The independently released 2001 ‘The Dead Shall Inherit’ mini CD was the only witness of the band’s second coming during the years 1997 to 2003. Though most of the original line-up was there during that second attempt, that mini CD wasn’t much of a convincing piece of work. It lacked the depth of the ‘In The Maze Of Kadath’ EP and its sound was just not exactly appealing either.

Apart from the two compilation albums, including the nicely done The Crypt vinyl edition, not much happened, not even when the band reunited again in 2018. Although the word ‘reunited’ is a little out of place here, as it is only two out of six original band members this time. It took the duo and new members until this year to release something new. And also the word ‘new’ is not quite accurate. In fact the band took the two tracks of ‘In The Maze Of Kadath’ and re-recorded it and added two new tracks.

I am definitely not a fan of re-recordings, and also in this case it feels like a mere abolishment of the great originals. The sound is much heavier and completely lack everything that made that Drowned Productions (pre-Xtreem Music) released 7” EP so magical. This way it has very little left of what can be recognized as ‘classic’ Catacomb. But this new take on their view of Lovecraftian Death Metal might work for newer songs, the melodicism and keyboards sound pretty good on those new tracks. But to be honest, it lost quite a bit of its unique sound and it doesn’t fit to that illusive and nightmarish world of Lovecraft. However, the fact that the first songs were based on those otherworldly horror stories does not mean they have to do so in the future. But because of their musical legacy, they have become more or less unglamorous with it anyway.

Though I wouldn’t see myself as a purist per se, I can’t really imagine anyone holding those early recordings dear really enjoying this overhaul. And I am honestly not completely convinced with the band’s current direction, but it is definitely not the worst come back ever either. So, we can now just sit back to wait and see what the band comes up with in 2023 with their first full-length to be released through Spanish Xtreem Music.