Necrovation – “Groupies, where the hell are ya?”

When it comes to old school death metal from Sweden one of the nicest new bands will definitely be Necrovation, a young band that has the same kind of attitude like the ancestors of the infamous Swedish death metal bands like Nihilist, Dismember and Entombed. They have released a demo-tape and a 7″ EP so far, and there is a split EP and a full-length coming up as well. Vocalist and guitarist Seb gives comments on some of my questions according the bands’ past, present and future, and like always Seb is pretty talkative and even uses this opportunity to gather all death metal groupies world wide! Enjoy…

Hey there, how are things going? I’d first like to go back to the beginning of the band. What were your main goals to form Necrovation?

Hey Felix, things are going slow but pretty good I must say. Our main goals?hmmm, no big ones at first. Guess we all just wanted to play metal. I guess the first goal was to write songs and release a demotape. And we did. Our goals now are a bit more than that.

To me Necrovation is one of those bands who are able to catch the true underground old school feeling, you know it all, demo tapes, vinyl, obscure black/white artwork and all that. Was this one of the things you definitely wanted to achieve?

Achieve or not, that is what we like. So I would rather say that if we were to release anything it would be in the old cool way and not in a new fancy over produced way, both music and design for that sake. So ok, yeah we like to achieve it, but then again, IT IS THE ONLY WAY!

You have released one tape before the “Ovations To Putrefaction” demo tape from 2004, it was shortly featured on your website but removed quickly. What’s with this?

Yeah that is true, but that tape was not released when we were NECROVATION. That was an old demo tape me and Bünger recorded, and then later formed a band on, there was after that one also another demotape, and after that we changed our name to NECROVATION and released “Ovations to Putrefaction” that is our first release, or that is Necrovation’s first release, so why we took it away was simply because we did not want to sell a demotape which wasn’t Necrovation’s! 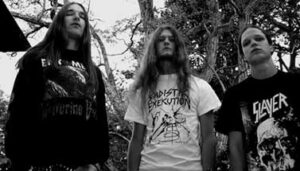 Then came the “Ovations To Putrefaction”-demo tape, I have the idea it sold pretty well. I saw it featured in several underground distros and I think you now released a third ‘pressing’ of it through Deathrash Armageddon, right? How are/were the sales and reactions on this tape?

Sold pretty well yeah it has, but then again all 3 presses only sums up to 300 copies.  Deathrash Armageddon released the 3 press, a Jap. Ed. And I know that Deathrash Armageddon has sold all it’s 100 copies now too. A demo is almost never printed in any large amount, therefore it is pretty easy to make it sell ‘good’. The reactions have been very positive, really great actually. The reviews have also been positive. DemoTAPES rule!

It also got you a deal with the new born Swedish label Blood Harvest Records which decided to release a 7″ EP of yours (“Chants Of Grim Death”). It has quite some difference with the previously released demo, what is that difference in your eyes?
The only difference is probably that we all got better at our things, and the 7″ is recorded in a better way. The sound changes everything, but I feel that the best song on Ovations to Putrefaction is ‘Putrid Evocation’ I think that that feeling is recognizable on Chants of grim Death. So In my ears Chants of grim Death is just a natural evolution, those 3 songs on Chants? was the 3 first ones we wrote after the demo tape.

The EP features a Merciless cover, can you tell me why you’ve chosen this band and this particular song?
We wanted to cover Merciless because we like them simply, a big inspiration and influence. And then The Awakening is a brilliant album and ‘Pure hate’ is a brilliant song!  And personally I think that when covering a song one should not cover a song that everyone else has covered or could cover, choose a song that will fit the release (and band of course) really well, and we did that by covering Merciless, PURE hate!

I saw on your website that some wicked guy decided to tattoo the artwork for “Chants Of Grim Death”, what the hell is going on there? First fan-maniacs and groupies?
The Wicked guy who tattooed his body with the Chants of grim Death skeleton was the guy who drew the painting, namely Nathaniel Colas. He told me that he had been looking for a suiting painting to put on his chest, and what could be more suiting than a cool cover made by him self (for a killer release..haha!!!) So it was not only admiration against us that made him tattoo the cover motive of Chants of Grim Death. Groupies, where the hell are ya?

The same label, Blood Harvest Records, gave you the opportunity to release a split EP with Corrupt and to release a full-length LP. I suppose you are total vinyl maniacs? What can we expect on both releases? Any major changes in musical style? Or do you already have some details on tracklistings, artwork, possible cover or guest musicians? And what kind of a band is Corrupt?
Yeah we are in good contact with Corrupt and thought it would be really cool do a split with them instead of releasing another 4 track EP before our Debut LP. And yes I prefer vinyl! What you can expect from our coming releases is the same wicked style as before. The only difference is that we continue to grow as a band and as musicians. So far the new songs tells me we are on the right way, sounds like Necrovation 100%, the only new thing for us is that we are now writing for a release with maybe 10 songs and not just 2 or 4 as we have done before. I think it is important that there will be variety in the songs and not just repeating what we know works, I want to make an interesting album!
So far we have 4 songs we want to put on the Debut LP, one new song was recorded for the split 7″ with Corrupt. And then we recorded a cover of an old fucking grim band, namely MORBID. Our own new song on the 7″ is ‘Black Spree’ a song that sounds really like us, among the best songs we have written if you ask me! And the MORBID cover is ‘My dark Subconscious’, CORRUPT have recorded one own song ‘Chain of command’ and a MERCYFUL FATE cover: ‘Curse of the Pharaohs’. So suiting enough the split 7″ will be called “Curse of the Subconscious”. Well what kind of a band is Corrupt, I would say they are a cool Thrash band. Very aggressive and very talented I think. They sound as they are mighty inspired by bands such as: SEPULTURA (EARLY!!!), MERCILESS, KREATOR, SODOM etc? They love the German thrash, but it is somewhat more than just Thrash, It is evil and you’ll find out soon.

Talking about guests, on “Ovations To Putrefaction” you have some guy called Pelle Piss doing some additional guitar work, what is the story behind this?
Pelle is a good friend of ours and he simply attended the recording sessions. He wrote the lyrics for “Invidious Darkness” and he plays the first 2 solos in “Rot to Rebirth”. Really good to have a objective ear when recording. He plays in VERMINOUS and SGT. CARNAGE too. Really good guitar player, good friend and it was cool he attended and contributed with some stuff.

More people-talk, there was some change in line-up, what was going on with Necrovation in the beginning?
The only line-up change that has ever happened is that our former guitar player Rob is out of the band. Not much to talk about here.

What can we expect from Necrovation the upcoming year?
You can expect that our debut LP will kill, it will be released by BLOOD HARVEST. It will be available on both vinyl and CD. That’s the main thing this year. Otherwise if you live in Sweden maybe some live shows. I don’t know what more you can expect from us, but expect us to be raw and ugly as before!

Ok, that is all for now, I hope to see the upcoming releases fast enough, and for you: finish the interview with your own last words, or? I might have forgotten something! Cheers?
I think we covered it all. Stay tuned to our molten webpage for release dates and stuff, when I answer this interview It’s about a couple of weeks to the release of ‘Curse of the Subconscious’.
And yeah, also for the time being we have some copies over of the 3:d press of ‘Ovations to Putrefaction’, maybe just around 7-10 copies, so if you want one act fast. And I also forgot about that there will be a second edition of ‘Chants of grim Death’, also through BLOOD HARVEST.

This sums it up, -until it’s time to kill? Cheers to you Felix and readers.
HAIL DEATH!