Wald Krypta – Where None Remain 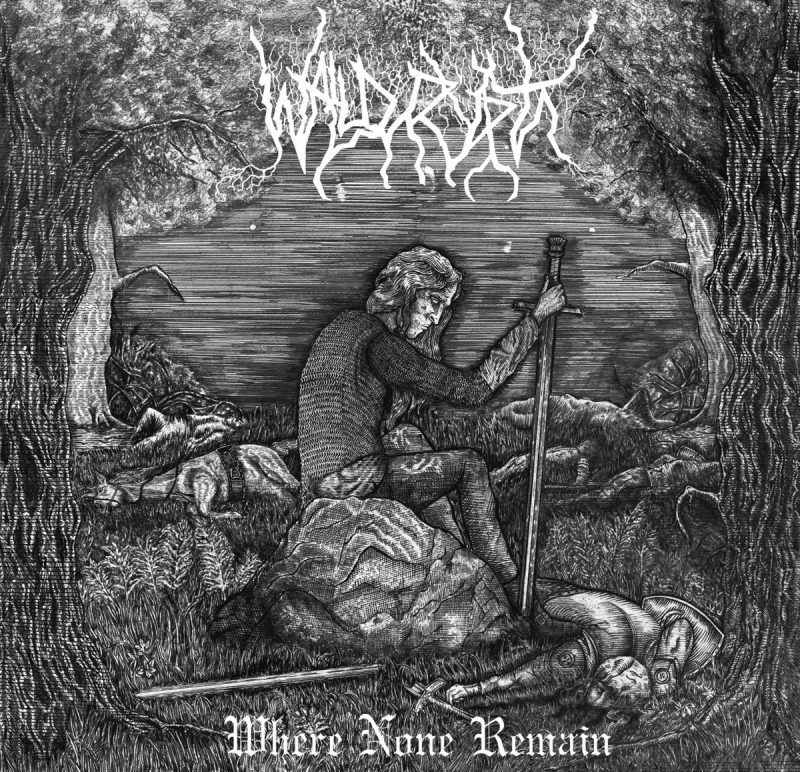 Wald Krypta are an American USBM band, formed by the duo of Heresiarch (Drums/Vocals) and Einsam (Guitars/Lyrics), both experienced and way more than just semi pro musicians, judging by the list of  underground bands they’ve been in, in the past.

Wald Krypta became active around 2016 with the release of their officially registered demo “Pandemic Winds…”, which is still available on digital format for download from their personal Bandcamp site. A first album followed and then a second demo. “Where None Remain” is their fourth release.

The album begins with raw fast-to-mid paced reverbing black metal, corrosive grinding guitars, muffled drumming and a rasping, hateful coarse voice, not unlike the lower range vocal-range on a Moonblood release. It’s pretty simple, linear in style – no fancy gadgets but not exactly that lo-fi either. Some of the tracks are slower, expressing a more melancholic feeling, almost bordering on DSBM or even the slower Judas Iscariot material, yet still remaining raw in nature.

The production of this album meets all the requirements of an underground release: guitars that suddenly move up or down the mix. The same applies to the vocals. The hollow drumming. And everything is drenched in a good amount of reverb for that extra spatial and cavernous feeling. This entire album reeks of sadness, gloom, negativity, misanthropy and hatred.

There aren’t any real highlights on this album, as was probably intended in the first place. A genuine Black Metal musician simply wants to his thing without becoming a commercial sell out whore or a poser.

Analysis:”Where None Remain” is an (under) produced underground USBM album, with standard song material and all the aspects for this type of raw Black Metal.

However – although Wald Krypta may not excel in any way – all these songs are delivered with the utmost belief and devotion to what they have made and what they believe in. And this alone justifies a purchase of their particular brand of U.S. Black Metal. I’ve heard and seen ‘exclusive’ re-issues or fancy compilations from old bands that are/were far inferior in quality and in originality and yet still are considered as being “cult” and mandatory in particular Black Metal circles. Cut through the hype, folks!

If you like your USBM grim, raw, hateful and full of spite and you’re not too demanding regarding the quality of the recording, then – by all means – Wald Krypta are thé thing for you.

It gets my FULL APPROVAL because Wald Krypta did manage to create a true piece of authentic underground USBM with this album.

Where are those times, when bands like Judas Iscariot, Krieg and Xasthur were making headway? I have always found that particular piece in time as being very exciting and innovating.

Feel free to check out their efforts on the Bandcamp site from Eternal Death or on their official website, as well as the one on Bandcamp from the band itself . I haven’t checked it yet, but I’m sure there can be found some material of this amazing band called Wald Krypta on the YouTube channel.