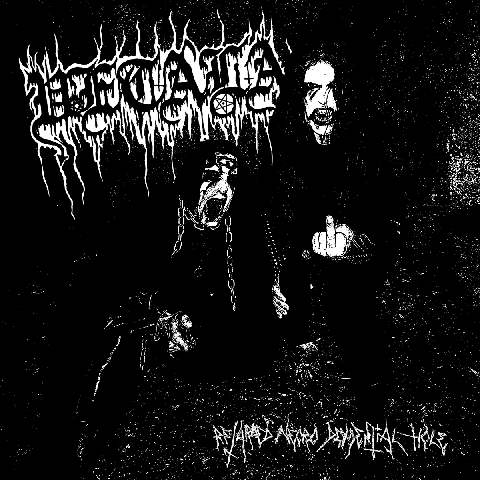 Again, a Portuguese act. And one of those acts you should, in case you have not yet, start paying attention. Vetala, crafted from the filthiest and dirtiest Satanic ideology, expresses, in music, all the hatred that they carry within. Part of the Black Circle, alongside Mons Veneris, Decrepitude, Irae and Rainha Cólera, Vetala is a beast of a band! Taking notes from what the LLN did, with a hint of Raw Punk, they gives us, in each and every release, a leathal dose of Raw Black metal that will shake you down to your core.

They grew with the “phenomenon” that has become the Raw Black Metal scene in the globe. Slowly, patiently, these musicians – who also play in acts such as Irae and Mons Veneris – have fabricated their own scent, their own image, their own Black Metal musical expression. Talented men, avid Black Metal believers, owners of their very own sound, Vetala has returned with yet more and more nuances to surprise us all. 4 tracks. 4 untitled tracks. 4 untitled tracks of raw black metal. No… 4 tracks of raw black metal and some devilish odours of experimentation. “Retarded Necro Demential Hole” is like a sharpen knife running through your neck: painless and swift. It will leave there, bleeding to Death.

Death. A “scent” we extract from Vetala’s latest offering. Necro Raw Satanic Dementially Retarded Black Metal. Sounds weird? So do they… but maybe that is the reason why we hold on to them so strong. Mid-paced, fast, aggressive… Vetala has it all in one single album! Massive! An album that lives within a broad spectrum of Black: from a guitar solo to an electronic moment, this release has it all without ever stop being Vetala! That is what makes it so relevant: it still is this one band, simply they have decided to add more and more and even more colours to their palet.

Four songs. Four untitled songs. Four moments of pure rawness and necro melodies. The blood of the LLN runs in Vetala’s veins. The raw, punkish approach to black metal, alongside those slower and more depressive moments, is what makes this album, a special one!

May the Old live in the New… (DanielP)