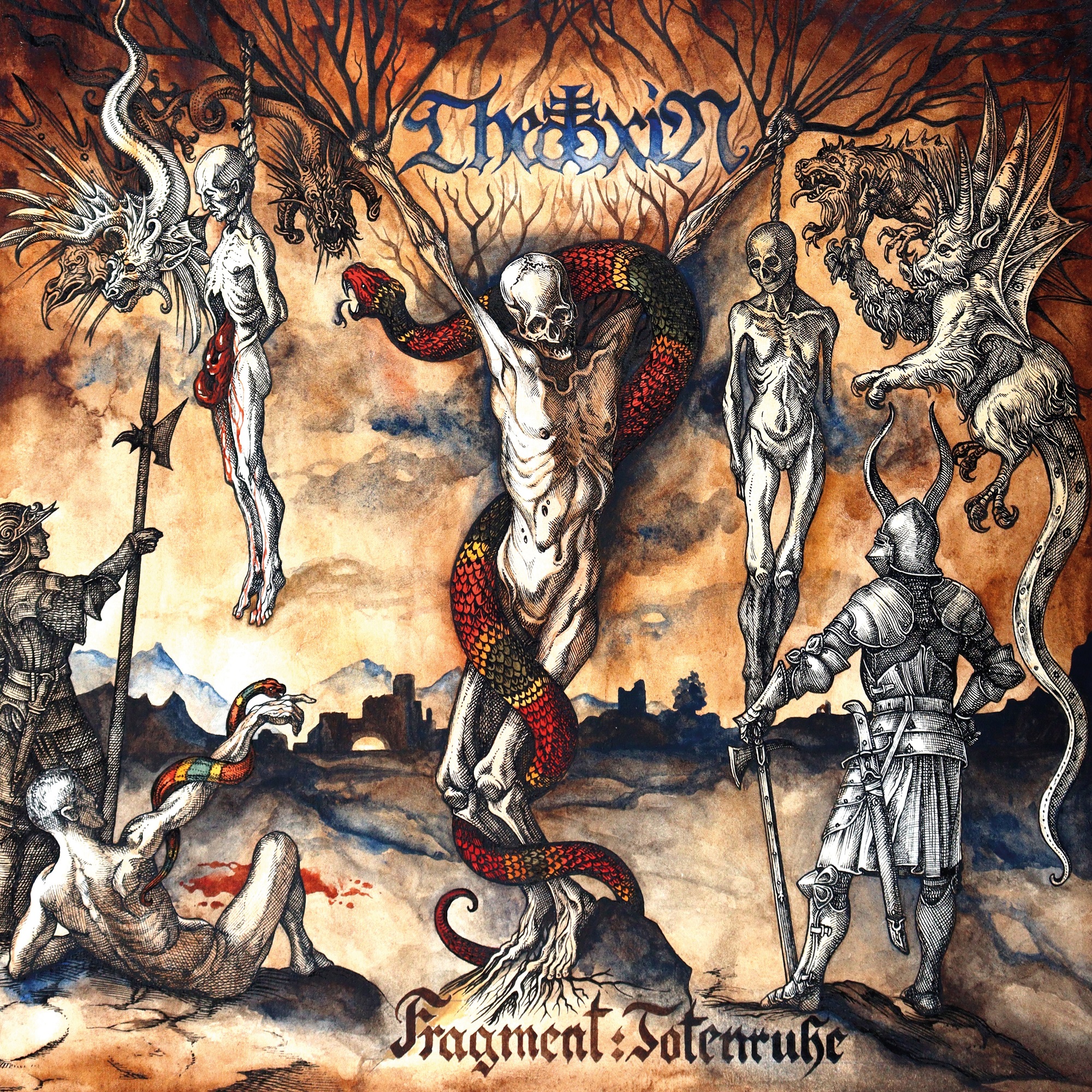 After some changes in their sound on the first few albums, Theotoxin seemingly found their style of Black Metal on the album ‘Fragment : Erhabenheit’. Eager to bring this to Europe, the band landed a spot on a tour with Archgoat and Whoredom Rife, but the pandemic brought those plans to a halt. With the tour postponed until late 2022, the band didn’t rest and continued working on their next album. Now, the band is ready to unleash their fourth album and second part of the ‘Fragment’ series, ‘Fragment : Totenruhe’.

Just like the predecessor, on the cover we find a gorgeous illustration by Jose Gabriel Sabogal which bodes well for a continuation of the path the band set on with the previous release. Indeed, ‘Fragment : Totenruhe’ is a logical continuation of ‘Fragment : Erhabenheit’. Where the band was searching for identity on the first two releases, they stay much closer to the previous album in a sound firmly rooted in aggressive, melodic Black Metal with some atmospheric elements, much akin to the Swedish style of Black Metal. To say things are exactly the same would be wrong though. Interestingly, at times the Death Metal elements from their earliest releases seem to resurface, especially in a track like ‘Towards the Chasm’ where some riffs show fairly prominent similarities to Behemoth. As a whole, however, Theotoxin stays much more on the Black side of things, and references to Emperor (‘Demise of the Gilded Age’) and Hate Forest (‘After Thousand of Years’) can be heard on top of the already mentioned Swedish Black Metal base. Clear is also the tremendous amount of skill of their drummer Flo Musil, who creatively handles any range of drum pace. On top of that, the vocals are diverse, and the songwriting ever creative and consistent. A personal favorite track is ‘Perennial Lunacy’, which starts with the vocalist screaming “This is… Perennial Lunacy!” and that together with some of the catchier groovier Thrashier riffs remind me of Urgehal on their stellar ‘Goatcraft Torment’ album. And even though there is nothing wrong with the inclusion of a cover version of Marduk’s ‘Frontschwein’ on the album, it really feels as if Theotoxin doesn’t need to cover anyone and is ready to firmly stand on their own with this album.

Altogether, it feels as if ‘Fragment : Totenruhe’ is a step up from the previous album in terms of everything basically. It’s more diverse, there’s no filler and above all, it’s more as if they found their own sound. After a few Covid-related setbacks their tour with Archgoat and Whoredom Rife should hopefully finally happen in 2022. With ‘Fragment : Totenruhe’ being released right around the same time, this seems as good a time as ever to spread the Theotoxin across Europe. (VincentP)