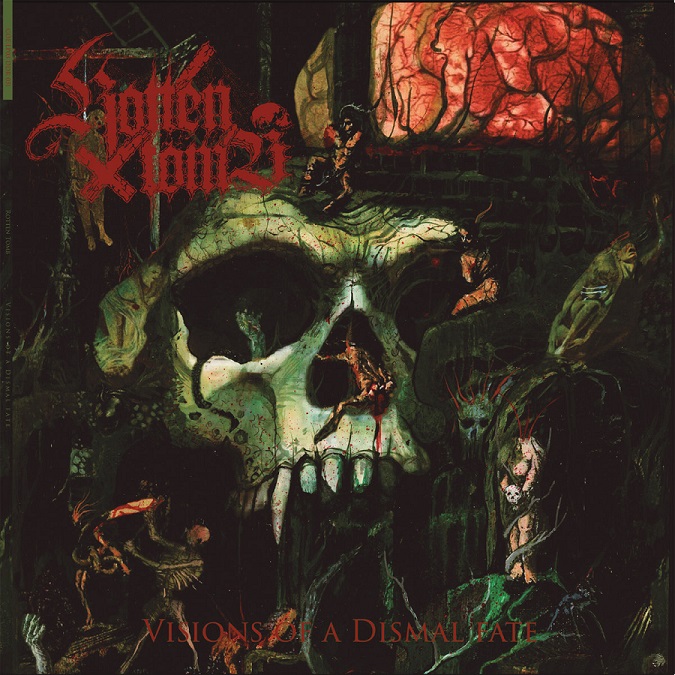 Love the opportunity to scope out bands from all over and once in a while come across South American acts that have an obvious devotion to the Old School Death Metal form; this time a Chilean four piece under the name Rotten Tomb finally released their first LP “Visions of Dismal Fate” after six years of formation.

Adaptable drumming methods, ornate riffs balanced with slithering bass lines & cavernous roars reveal an impenetrably stagnant production that is alluring, notable on “Denial, Desolation, Resignation”. Offering eight tracks, there’s quite a bit to take in during its thirty eight minute run. With the exception of “Internal Fear”, they’re elongated yet not drawn out because of its intricate textures that time perception ceases when this album runs its course.

Starting with the longest of the bunch “Devourer of Life”, love the descending dark undertones that settle in dominated by trembling riffs and pulverizing drumwork you can’t help but move forward & once again delighted with the writing in “Human Paradox”. You can tell they put so much effort into all aspects that nothing is left untouched. Everything is up to par and quality can easily be mistaken from something of early 90s recording. It’s organic, gripping, & a gem that deserves more recognition. Personal favorite is “Near End”, has a sweet steady build up, enough time for a bass solo before those explosive punishing vocals come in, & resonates most vehemence of all tracks.

Fans of Autopsy’s “Mental Funeral”, Disma’s “Towards The Megalith” or Funebrarum’s “The Sleep of Morbid Dreams” will appreciate this one! (Tori Belle)