Ancient Crypts – Inhaling the Fumes of a Burning Carcass [EP] 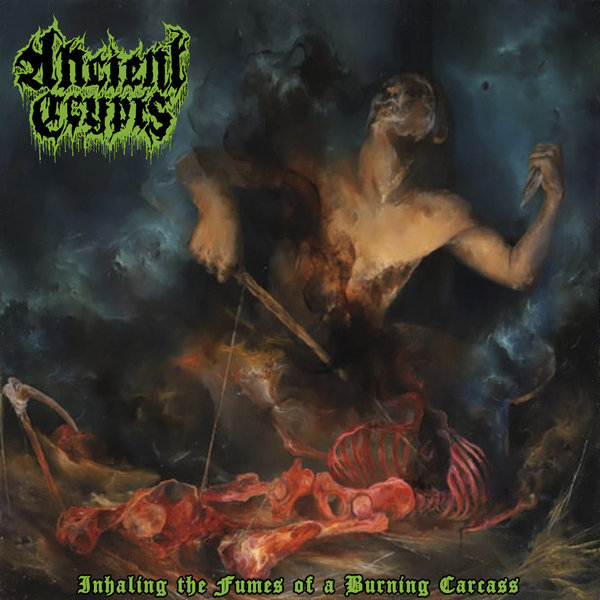 Old Death Metal in its most rotten and obscure form. This band only reaffirms that in Chile the dark death metal is the speciality. We already know that one of its greatest exponents today is Unaussprechlichen Kulten, but it is a large number of bands that know how to do this formula that mixes the decrepit with the brutal, such as Godless, Azathoth, Uttertomb and others. By the way, one of the members of Ancient Crypts was guitar for Unaussprechlichen Kulten.

If we talk about this “sub-style” within Death Metal we find two very particular things: chaotic quick parts and hyper-dense parts. Ancient Crypts performs quite well the mixture between these two characteristics. Let’s go with the first. The sick chaos welcomes you from the second track (the first is an intro) “An Amorphous Simphony of Accursed Flutes”, with a furious speed and guitars invoking terror with their melodies. This same feature will be found in the course of the album, however the band is not limited only to the chaos, but has riffs and rhythms that bring us to remember how death metal was done in the past. Thus we find the galloping rhythm of “Sarcophagidaes”, third track, which makes us feel all the stench of Sinister or Asphyx.

Harmonizations are an important factor in creating the mortuary atmosphere in Death Metal. An example of this is the perfect work of Mortem and Incantation. And precisely on that same route goes Ancient Crypts, making excellent sound nightmares, full of heaviness and harmonies conducive to any funeral, so much so that its dense parts could be its best card. This is demonstrated in the monumental song that gives its name to the EP, “Inhaling the Fumes of a Burning Carcass”. Crushing, scary, dismal. Simply great! (MarioR)