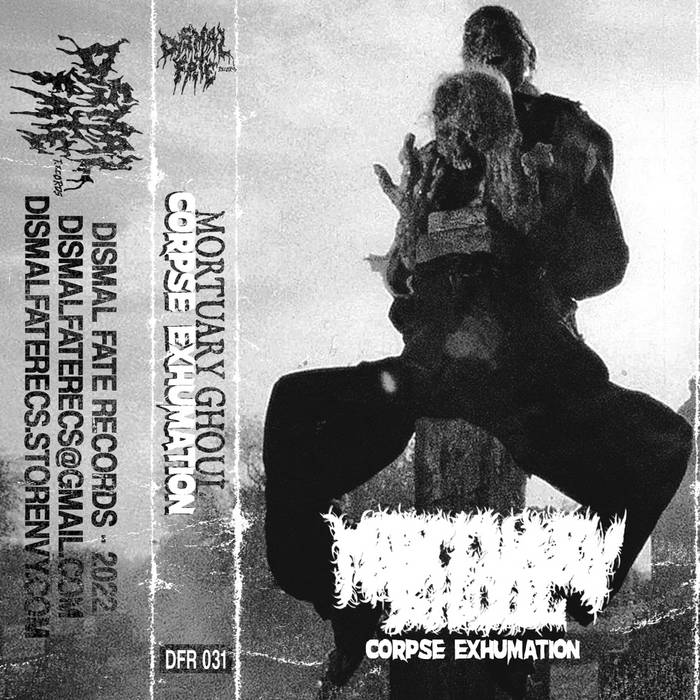 Nearly half a century later, and metal still draws inspiration from Tobe Hooper’s 1974 (& only one that matters) notorious classic “The Texas Chainsaw Massacre”, this time being Ohio based solo act Mortuary Ghoul and his EP “Corpse Exhumation”.

This nearly twenty minute EP is without a doubt for fans of Mortician, Fluids, Ed Gein & of course fans of The Texas Chainsaw Massacre I & II movies. Aside from this project, I admire that the brains of this project uses different aliases towards each active group he’s in, including Morgue Dweller, Imperium, & Lawless to have these separate entities that pertain to certain concepts aimed for, this time being brutal Death Metal not disparating Black, Thrash, or Goregrind styles.

Cover art is a screenshot taken from The Texas Chainsaw Massacre, always a grisly scene that sets the tone for the entire film and being eerily “dusty” gives you chills & along with those big ass shoes anticipating dealing with a behemoth.

Aside from covering Mortician’s “Chainsaw Dismemberment”, six other tracks featured starting with “Wear Your Face” after the audio plays really starts at 1:36 mark, instant riffs of constant chugs that are transparent, dense, and concise. “Sexual Intercorpse” has a similiar formula with exception of being shortened & using news audio in it’s intro. Drum work isn’t intrusive even with the bludgeoning blasts that kick in near the three minute point & those murky gutturals that make your stomach turn. “Brain Stew” stays within a consistent mid tempo riff that creates build up for the swift massacre that is titled “Brandishing The Chainsaw” being all around pummeling blasts along with similar tune “Deranged Motherhood Personified”.

“Corpse Exhumation”, even though I don’t favor many sequels, good call to use audio from The Texas Chainsaw Massacre 2; was anticipating this title track to be a brutal assault as previous, but is the slowed down, menacing approach that builds up to the butchery midway, while injecting groove more so than the rest.

Overall a great play up to Mortican worship bands and bringing the true The Texas Chainsaw Massacre briefly back to light! Well done! (Tori Belle)