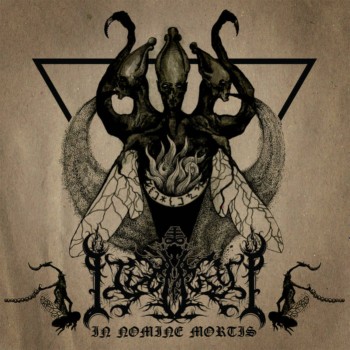 Idolatry are a band from Edmonton, Alberta in Canada. The band seems to have started around 2013 and managed to release amongst others a full length album, entitled “Visions from the Throne of Eyes”, as well as a full blown split album with Kult Ov Azazel, both in 2016.

“In Nomine Mortis” is their second effort from 2019. The album opens, noblesse oblige, with an acoustic intro, “Ex Nihilio” – resonating in all directions and displaying an eerie, creepy and chilling cavernous appetizer. And as expected the next song materializes in full satanic pride and glory. Massive glacial riffs are dished out aplenty, amazing 1990-ies hypnotic tremolo picking builds up a gigantic wall of guitars, backed by a solid rhythm section with a noticeable bass, and flexible fast drumming. Vocalwise – it’s all torment, bile, darkness and satanism spewed out around the clock.

The songs are well arranged, they sound dynamic, containing narrative slower parts, freezing acoustic passages and possessed rancid vocals that are quite prominent in the mix and add the insanity of this Black Metal frenzy. There’s even some melody to be detected in the songs, although it is mostly of the raw and abrasive kind. Idolatry know what they want and they know how to deliver it. From basic tremolo picked fills and melodies to more mid-paced epic riffs, dead stops, you name it. It’s all there and every song stands on its own.

Is their music something new? Let’s say it is way, WAY above the average. Forging Scandinavian Black Metal with grim USBM and serving it as an ice cold dish with all the trimmings deserves an applause in my opinion. Idolatry talk it the way they walk it.

Conclusion? Far from being yet another second wave worshipping pseudo Black Metal clone/wannabee, “In Nomine Mortis” contains 10 tracks of well-produced, no-nonsense Black Metal. This is no commercial mainstream stuff, but authentic Black Metal as it was meant to be.

The album gets my thumbs up and I suggest that interested individuals, who have forgotten how Black Metal actually sounded in the early 1990-ies, have a good listen to this album, before dismissing it as yet another mediocre Black Metal garbage act. HORNS UP!!! (LV)