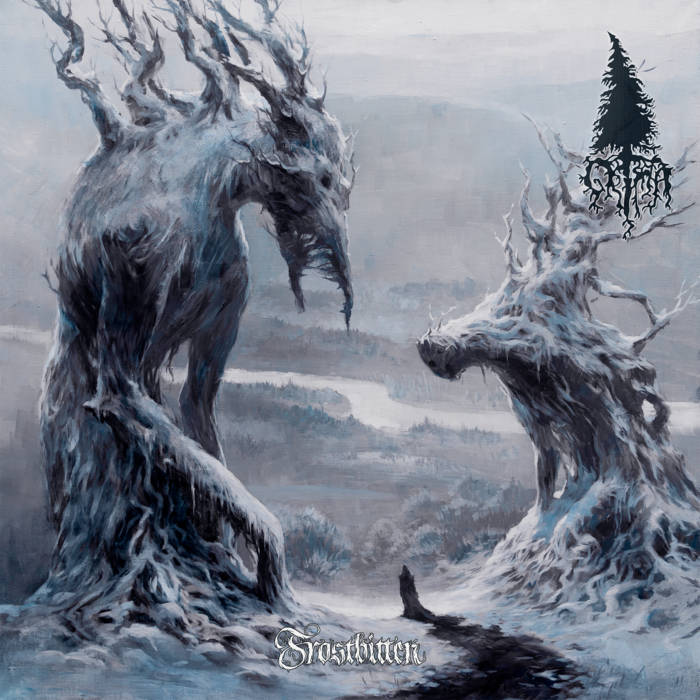 From the far flung reaches of the Russian state, Krasnoyarsk to be exact (Just north of Mongolia and deep within the heart of the inhospitable lands of Siberia) comes an Atmospheric Black Metal duo by the name of Grima. An interesting fact about the band, both members Morbius and Vilhelm are twin brothers. ‘Frostbitten’ is the bands fifth studio album since 2015, and have been released on all formats by label Naturmacht Productions.

Grima excel at creating soaring atmospheres that bring to mind the Aurora Borealis, windswept snowy mountain passes and dense forestry, whilst at the same time dishing out bleak, marauding guitar leads that mesh with scorching, abrasive vocals and sturdy, dextrous bass play. To keep the album flowing, Grima adopt a drumming style that traverses the borders between rampaging hostility and subtle, mood building tones. And that is Grima all over, forever at a Juxtaposition between a grating sound as harsh and bleak as the deepest and most impenetrable of Siberian winters, and yet laced with the beauty and grace that those winters bestow upon the landscape.

As I previously mentioned, this is Grima’s fifth full length offering, and all five are of a very high standard and deserve to be experienced. ‘Frostbitten’ though is Grima at their most fluent and cohesive best. An album of majestic harmonies that bring to life the cold, severe colours of a savage landscape, as well as jarring, grandiose guitar and drum work that hammer home the true dangers and perils of their environment.

Supremely written and crafted, ‘Frostbitten’ is a discordant, stark, desolate opus of cruel, exposed and bitter rhythms and melodies with more than a little Pagan Black Metal influence thrown into the cauldron.