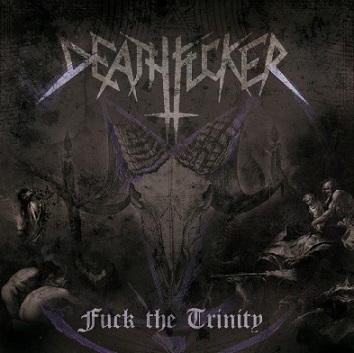 Blasphemies should be spit upon you. That`s probably what Deathfucker thought when forming the band in 2015 in Italy. Their goal: spreading evil content without any specific influence, just doing what they love. Their demo “Fuck the Trinity”, released on tape and then on CD 1 year later, is a mix of crusty, thrash laden extreme metal, sounding sometimes like Slayer, sometimes like Deathstrike with a portion of Abscess/Autopsy… or S.O.D.. But in short terms, power reigns! Uptempo beats and face melting riffs meant to be banged (by your head). Slayeresque solos, palm muted staccato riffs, double bass grooves and an all commanding voice upon it. This is nothing new, but more than convincing, played with the right attitude and the right spirit and of course the right moment to bring back a cool crossover which never gets old when done well. Fans of crustinduced Thrash should grab this. (DPF)