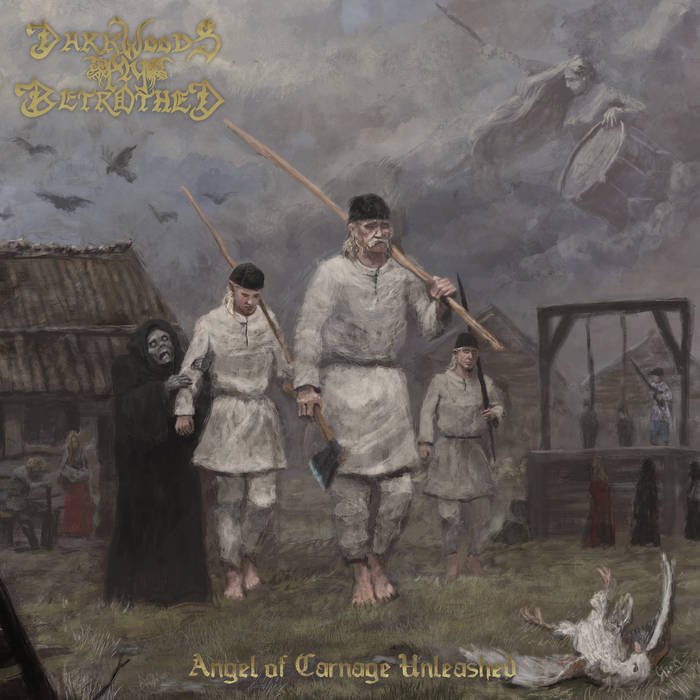 Although Darkwoods My Betrothed was one of the very first Finnish Black Metal bands, with their roots in the first half of the 90’s, first under the beautiful name of Virgin’s Cunt. Despite that, they are a band that seems hardly remembered, let alone talked about. That while the band was actually the most promising Finnish Black Metal band in the mid 90’s. This was at a time when there was hardly any Finnish Black Metal scene. Besides Impaled Nazarene, there was only a handful of bands that mattered. Barathrum was just starting to release records at the same time, and the ever-turbulent Beherit had already entered a serious musical identity crisis.

What we call Finnish Black Metal nowadays is something that only took shape later. It was only with bands like Satanic Warmaster, Sargeist, Horna, Behexen and Baptism that the trademark Finnish Black Metal sound really took shape and gained the fame it has today. The Second Wave of Finnish Black Metal, if you will. Before that time all bands sounded very different and there was no recognizable sound. Impaled Nazarene, for example, had a completely different vision of the genre than Darkwoods My Betrothed had. Unlike all other bands in Finland at the time, Darkwoods My Betrothed based their take on the genre on Norwegian Black Metal, including the accompanying Pagan/Viking narrative. That is something that they gradually dropped further and further.

Consequently, the albums that the band released during the first period sound significantly different from each other. You can therefore not speak of something like a recognizable Darkwoods My Betrothed sound. That is relevant because the band still seems to struggle with their musical identity. The band threw in the towel just after the release of 1998’s ‘Witch-Hunts’ and celebrates their second coming with this new record (not counting the short revival in the mid 00’s, that resulted in only a few live appearances and no recordings). After having heard ‘Angel Of Carnage Unleashed’ a considerable amount of times now, I am still left quite confused.

It is as if the band wanted to put something of all their previous albums into this new record. You can approach it positively and call this album a musical rollercoaster where you are constantly surprised with all sorts of ideas. But it is almost impossible to be that positive all the time, sometimes the large amount of ideas are fired at you at breakneck speed and you never manage to absorb and process them all. As a result, the album sounds incoherent. It feels like the band had piled up a huge amount of ideas over the past years and they had just thrown everything they had into this album. It is as if the band used the more standard Black Metal sounding ‘Witch-Hunts’ as their basis and threw in many of their melodic and Pagan-like elements from the first two albums on top. As a result you get something that sounds like a mixed bag that goes from Einherjer-like Viking Metal, complete with clean singing, to downright blazing Black Metal in the vein of Mayhem (listen to the opening track, which sounds like Maniac is doing his trademark preaching). Yet, the individual songs are of an excellent standard and also sound better than the band has ever done. It is just a feeling that there is no guidance. Now, I am not necessarily someone who always needs those fixed patterns and I quite like some musical adventurism, here, however, the common thread seems lost to such a degree that it is a bit distracting and detracts from the listening experience.

Having said all that, I am still glad the band is back; in almost the original line-up in which they started out some thirty years ago and now include Tuomas Holopainen (Nightwish) as a permanent bandmember instead of only a guest musician like on the previous three records. For now I still prefer their second album, ‘Autumn Roars Thunder’ (1996), but this new album offers enough leads to eagerly look forward to a new album, hopefully that won’t take the band another 23 years.