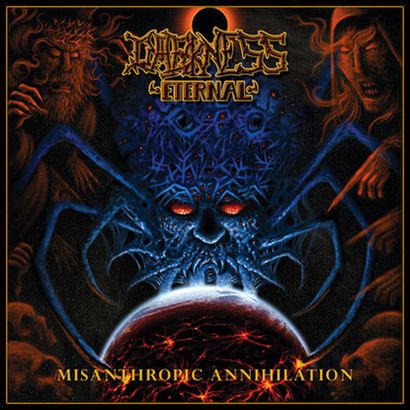 This album is amazing.

In the process of reviewing metal albums, I attempt to hyperbolize as little as possible. However, occasionaly an absolutely monumental album will emerge from the underground and shock even the most jaded among us. I am overwhelmingly pleased to say that Darkness Eternal’s ‘Misanthropic Annihilation’ is such an album, and one that should be revered alongside such legendary death metal releases as ‘Covenant’, ‘Effigy Of The Forgotten’, and ‘Left Hand Path’.

But what is Darkness Eternal, precisely? Well, it is in fact a single man, George Velatetis of The Chasm playing all instruments. The music is majestic, sweeping death metal, with a developed sense of romantic melody and subtle black metal influences. This is a distinctly riff-based album; vocals and (somewhat clumsily played) drums always take a back seat to melody (probably the most definite black metal element on this LP), but ‘Misanthropic Annihilation’ is refreshingly devoid of any ‘old school’ sentiment. While this release is in no way modern, there’s still no Obituary or Autopsy to be found here.

Imagine for a moment a near-flawless combination of Incantation, Deicide, and Immolation coalescing into a single band and then deliberately incorporating influences from Immortal’s ‘Pure Holocaust’ and Burzum’s ‘Hvis Lyset Tar Oss’. The result is massive, melodic, epic death metal, with intriguing neoclassical touches. The songs are long, sprawling and elegant, and genuinely patient in their development. Tracks start and finish in luxurious, grandiose fashion, and run for 5-9 minutes, giving the narrative plenty of room to breathe and grow.

The melodies created are vast and apocalyptic (aided in no small part by the roomy, atmospheric production), as well as surprisingly emotional, an unusual but not unwelcome addition given the genre. The tempo is overall rather slow, with sections of deliberate blasting. Portions of atmospheric riffing are used vividly, such as the outro to ‘Cold…End…Dead’, with an Egyptian-inspired melody that Nile could only dream to match in beauty in power.

The tracks are all fairly similar to each other, but not to the album’s detriment; this feature is used in a way similar to that of Bolt Thrower, where similarity is used to strengthen a core atmosphere. Despite this, certain tracks truly stick out in my mind: first and foremost being the stunning ‘Darkness Conquers All’, the melodies and development of which are some of the best death metal has ever seen. Also of note: the immensely dark ‘Suicide Unto Infinite Euphoria’, and the cascading finality of closer ‘Worship Us’.